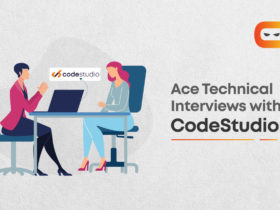 Today a fresher, tomorrow a great leader. As said, “Leadership is intelligence, honesty, and doing the right thing.” This alumnus has gotten where he is today only because of his wise choices and honesty in his studies and work. Let’s get to know more about our super ninja alumnus Upkar Saraswat.

Getting To know Upkar

Upkar completed his BTech in Computer science and engineering from IIIT, Kota. Currently, he is placed at Samsung R & D as a Software Developer.

His Journey With Coding Ninjas

While his first year in college, Upkar opted for an Introduction to C++ and Data Structures & C++ course. He remembers, that during his first semester he wasn’t able to solve the problems given to him, however, he saw a drastic improvement in his coding skills and the way he grasped the concepts after doing the courses.

Cut to the second year, as he had Data Structures and Algorithms as one of his subjects, he was one of the best performers amongst all the students. Delighted, he gives the credit to his decision of going for the courses in his first year.

He even took up Java and Web Development course to have good hands-on them and upskill his resume. Not only this, but Upkar also won a couple of hackathons. This young boy has the capability of achieving some great heights and we will definitely manifest that for him.

Upkar recalls that he never named the variables properly and his instructors at Coding Ninjas always instructed him to name them in such a way that they had some meaning. Now, when he has entered the corporate world, he realizes the importance of it and feels grateful to have these kinds of lessons incorporated into him.

Adding to it, he mentioned that the Object Oriented Programming (OOPs) concepts are significantly used in the industry, and having a hang of them can be of great use.

What Did Upkar Do differently To Be Placed At Samsung R & D?

Here, the choice of courses you take plays a huge part. Upkar says, “I took a Computer Programming course from Coding Ninjas which helped me to crack coding questions in the online round because the problems asked were different and a bit tricky”.

Upkar’s Uniqueness In His Own Words

“I did my courses honestly.”  This one-liner sums Upkar’s specialty in his own words and we couldn’t agree more.

What Is A Typical Day At Samsung R&D Look Like?

“One of the best things I can say about working at Samsung R&D  as a Software Developer is that the schedule is not jam-packed. Over that, being a product-based company everyone has to play their part right, and the rest will happen automatically. Currently, my training is going on and also I am involved in some work.”

His Strategy To Overcome The Challenges

While having a conversation with us, Upkar very swiftly highlights one of the challenges that most of the freshers might have faced and are still facing. “Coding as a student is completely different from coding that goes into building the products in the industries. For coping with the change, I am being consistent so that I don’t forget things, also, I am willing to learn to make the most of it, so I am putting enough effort into what will require for it”.

The most awaited part for which every student awaits is the golden tips from their super seniors and why not? We also strive to know how and what they did to reach here so that the current students can be encouraged and get great guidance from them.

“Choose your courses wisely and complete them with utmost honesty. This might land you your dream job offer. Taking the course is just the start, being regular with coding is important, and remember, the will to learn more should always be intact”.

What Motivated Him To Stay Focused?

Teachers are the ones who show us light and just like that for Upkar Ankush Sir, who is also the co-founder of Coding Ninjas and one of the faculties. He says Ankush Sir’s live sessions were his ultimate source of motivation.

Message For The Ninja Family

He conveys his immense love and says “Coding Ninjas is doing a great job” and he wishes the best for his alma matter. Taking this complement as a badge of honor we sum up this blog here.

Hope you enjoyed reading Upkar’s story. If you too want to share your journey then do write us at – alumni@codingninjas.com