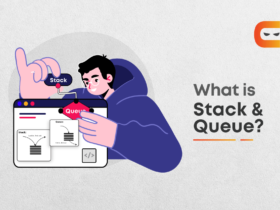 Introduction to Data Structures for Interviews: Stack And Queue

We live in an era of constant technological progress which is backed by advances in the field of machine learning. Machine learning algorithms are highly automated, self-modifying and continue to improve over time with minimal human intervention.

Machine learning algorithms can be thought of as a BlackBox which trains on the input data and is able to predict the expected outputs for other unseen inputs that are fetched into the BlackBox. In other words, machine learning is a concept that allows the machine to learn from examples and experiences without being explicitly programmed.

The type of machine learning algorithms that best solves your problem statement depends on the business problem, nature of the dataset and the resources available.

These algorithm types train on a labelled training data to produce a derived function that can be applied to predict a label for never-before-seen testing data.

These algorithm types train on unstructured and unlabelled training data and club similar data subsets together.

These algorithm types train on an amalgamation of both labelled as well as unlabelled data. The unlabelled dataset is divided into smaller subgroups having more similarities within them, which is then fed to supervised techniques to generate appropriate labels.

These algorithm types keep improving their performance and accuracy incrementally with the help of reward feedback. This addition of new data into the training data over time helps the systems become more sophisticated and better trained.

We have listed down some of the most popular algorithms of today’s times. These are:

Naive Bayes is a classification (supervised learning) algorithm that is based on the Bayes’ Theorem which assumes that the presence of a particular feature in a class is unrelated to the presence of any other feature. Even if the features are related, the classifier would consider the individual properties independently when calculating the probability of the outcome to occur.

It is easy to build and can outperform even the sophisticated classification methods for massive datasets.

When To Use Naive Bayes Algorithm?

There are two common versions of regression algorithms. These are:

The goal of linear regression is to fit the best-fit straight line through the dependent variables. The equation of the regression line can be represented by the linear equation

The coefficients A and B are derived by minimising the sum of squared differences of the distance between the data points and the regression line.

Also known as logit regression, the goal of logistic regression is to predict the probability of an event by fitting the data to a logit function. It helps model a binary outcome (0/1) with one or more explanatory variables.

Hence, it is actually a classification machine learning model. The equation of log odds can be given as follows:

When To Use Regression?

Some Common Applications of Regression:

Decision Trees are supervised machine learning algorithms used for classification problems. The population is split into two or more homogeneous sets based on the most significant attributes and works well for classifying both categorical as well as continuous dependent variables.

Due to its easy structure, it is easy to assess the minimum number of questions one has to ask to arrive at a logical conclusion in a structured and systematic way.

A sample decision tree can be represented as follows:

When To Use Decision Trees Algorithm?

K-Nearest Neighbours Algorithm can be applied for classification problems. It stores all available cases and classifies any new cases by taking a majority vote of its k nearest neighbours. The neighbour which the new class shares most in common with is the case that is assigned to this class.

The distance between the class and the neighbour is calculated using either of the Euclidean, Manhattan, Minkowski or Hamming Distances. However, since it is computationally expensive, data should be pre-processed by normalising the variables.

When To Use K-Nearest Neighbours Algorithm?

Support Vector Machines are supervised machine learning algorithms used for classification. The data is classified into different classes by a line (hyperplane) which separates the various classes. The hyperplane can be linear as well as non-linear.

The best-fit hyperplane is chosen to try to maximise the distance between the various classes with help of a process called margin maximisation since the model can give better classifications if there is more distance present between the classes.

When To Use Support Vector Machines Algorithm?

Which is the best machine learning algorithm?

What are the five popular algorithms of machine learning?

Some algorithms form the basis for many machine learning algorithms and hence are more popular than others. These are:


What is the basic machine learning algorithm?

How many algorithms are there in machine learning?