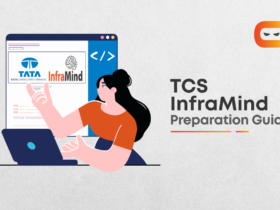 SQL(Structured Query Language), which is directly related to DBMS(Database Management System), is a topic that is undoubtedly asked in the interview rounds.

In this blog, the focus is on intermediate-level SQL Interview questions, and in the previous blog, we have covered the SQL Questions for the beginner level. In continuation with this blog, we also have a third part consisting of advanced-level questions.

Q1. Name 5 SQL statements along with the command(s) they entail.

Ans: The 5 SQL statements, along with their commands, are given below:

1. DQL – Data Query Language is used to fetch data from a database. The commands used in it are:

2. DML – Data Manipulation Language. DML is used for the manipulation of the data itself. The commands used in it are:

3. DDL – Data Definition Language helps define schema or database structure and defines the structure that holds the data. The commands used in it are:

4. DCL – Data Control Language is used to control the visibility of data. The commands used in it are:

5. TCL – Transaction Control Language helps to deal with transactions within the database. The commands used in it are:

Q2. Explain DDL in brief, along with functions.

Ans: DDL: These are the commands used to define the structure of the table you create. Its functions are as follows:

1. CREATE: Used for creating database objects, such as Views, Tables, Indexes, and Synonyms.

2. ALTER: Used for changing the existing structure of the table. It entails the following commands:

3. DROP: Used for removing database objects from the database.

4. RENAME: As the name suggests, it is used for renaming the table.

5. TRUNCATE: As introduced in Oracle 7.0, Truncate is used for deleting all the rows permanently.

Ans: Stored procedures are the prepared SQL codes that can be saved and used repeatedly. Hence if there is a query that’s used multiple times, a Stored Procedure can be used.

Ans: The difference between Stored Procedure & Functions are:-

Q5. Define ‘TERM’ and explain how it is different from ‘INDEX’?

Ans: Indexes are frequently used in SQL. When it comes to answering queries faster, TERM simply ensures quick retrieval of data and relevant information from the table contained in the database. The index can be created on a single column or a group of the same.

Ans: – The Cartesian product of two tables included in the join is called Cross Join. The resultant table contains rows same in-number as in the-cross-product of no. of rows-in two-tables.

Note: If the WHERE clause is used in cross join, the query will work like an INNER-JOIN.

Ans: Index is a database structure that is used to improve the performance of database activity. A database table can have one or more indexes associated with it. A field expression defines the index that the user can specify when they create the index. Typically, the field expression is a single field name, like OFFICE_EMP_ID.

Indexes can be created and differentiated for different purposes:

Unique indexes are indexes that maintain data integrity. It ensures that two rows in a table do not have identical vital values. Once a unique index has been used /defined for a table, it is assured that no two rows, whether new or pre-existing, have the same fundamental values.

Non-unique indexes, on the other hand, are used only to improve the performance of the query. It is achieved by maintaining the data values that are used frequently in a sorted manner.

The only difference between both types of indexes is that the database manager attempts to keep the data in the same order as the corresponding keys appear in the clustered index.

Clustering indexes can improve the performance of most query operations because they provide-a linear access path to data stored in the database.

Ans: – A subquery, also known as a nested query or inner query, is the type of query which resides within another query (as suggested by the name). It is generally used to restrict or enhance any kind of data that is supposed to be queried by the main query, limiting or improving the throughput of the main question.

A subquery is divided into two types: Correlated and Non-Correlated.

1.    Correlated: Although the correlated subquery can’t be termed as an independent query, it can still help refer to the column in a table listed in the FROM of the main query.

2.    Non-Correlated: It can easily be considered as an independent query, and its output is substituted in the main query

Q9. Differentiate between SQL and MYSQL.

Ans: The following table shows the difference between SQL and MYSQL:

Q10. Define Cursor and explain how it is used?

Ans: Cursor or a Database Cursor is a control structure used for traversal records in the database. In addition, it also facilitates processing after the traversal—facilities such as addition, retrieval, and deletion of the database records.

Ans: – Entity: Entity can also be a real-world object. It can be either tangible or intangible. For example, in a database called “College,” professors, students, departments, workers, and so on can be entities. Each entity has some associated properties with it.

Q12. How to use the LIKE operator in SQL?

Ans: LIKE operator is used to check if an attribute value matches a given string pattern.

With this command, we will extract all the records where the first name is like “Sarthak”.

Q13. How can you insert NULL values in a column while inserting the data?

Ans: NULL values in a column can be inserted in the following ways:

Ans: Join is a keyword used to query data from more tables based on the relationship between the fields of the tables. Keys play a major role when Joins are used.

Ans. In a database management system, a 2-Tier architecture is an architecture where the User Interface or view layer runs on the client’s machine such as desktop, laptop, tablet, phone, etc. This data is then stored on a server. To connect to the database, clients have to use the ODBC connectivity APIs. This type of architecture helps enhance the security of the database since the client cannot access the database directly.

Ans. 8 different keys in DBMS are as follows:

Ans. In SQL, CLAUSE is an optional statement that defines a condition to present data. Example:

Q19. How is a Trigger different from a Stored Procedure?

Ans. A Stored procedure can be called explicitly by the user. It can take certain parameters and can return such values. Like any other program, a Trigger is called spontaneously (automatically) when a specific event occurs. It cannot take any values from the user.

Ans: The table below shows the difference between network and hierarchical database models:

Ans. It’s a database that helps in speedy data retrieval for any kind of activity on the database. This process of speeding up data retrieval and collection of indexes is known as Index Hunting. It uses query distribution and query optimization techniques for better retrieval.

Q22. Get the current date WITHOUT using GETDATE.

Q23. Get the first five characters of  Emp_name from the EmployeeInfo table.

Q24. Get ONLY the place’s name from the Address column of ‘EmployeeInfo’.

Q25. Write a command to do the following:

B.   Group them according to their Gender

Q26. You are provided with the list called ‘MENULIST’ with a list of dishes that restaurants across the city are serving. From the said list, retrieve two least expensive and two most costly dishes.

Q27. Find and extract duplicate records from a table with such parameters:

Q28. Find Nth Ranking student in JEE. Without using the TOP keyword or the limit keyword.

Q30. Write a query to fetch N% records from the EmployeeInfo table.

This blog covered a mixture of theory and query-based SQL interview questions. After going through the questions we have covered in this blog and the last part, i.e., SQL Interview Questions for beginners, you can check out Part 3, which contains the advanced-level questions. Now, you will be able to ace your interviews.

You can also check out our course on DBMS, which will help you get interviews ready.