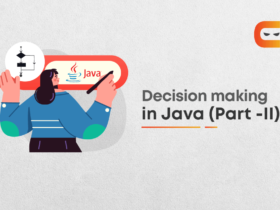 Welcome to another Blog on Top C/C++ Interview questions. Programming questions asked in an interview are not difficult to answer if you have clearly understood the concepts. So this blog will help you out by resolving your doubts on C/C++, with the help of some programming questions and some eye-openers (so-called tricky ones) typically asked in Interviews.

Before moving on, you may refer to Part 1 of this series which consists of 30 theoretical C/C++ interview questions.

Q1) Find the output of the following C program fragment which is written in the main function:

Answer) Let’s observe the above code. The first line is a char pointer storing a contiguous sequence of characters of length 16.

In the code, c[11] = *(c+11), which is the address of the element at the 11th index. Since we cannot calculate the exact address but assume that the starting address is some arbitrary number, say 1000 here. (Note: you can start from any address of your choice)

The main thing to learn here is the address of the next element is:

Hence the address calculated for each element w.r.t the starting element is shown in the figure.

c: starting address or address of the first element.

It’s the address for the element at the 12th index, and when we print it,

It will dereference the pointer starting from the 12th index.

Q2) Find the output of the following C program:

Answer) This tests your knowledge of loops, static keyword. Understand the working of for loops by the following flow diagram:

Now follow the flow of the diagram and try to dry run it for a loop.

The important thing here is that the ‘count’ is a static variable and will keep on getting updated once it’s initialized for the first time.

So, the final output on the screen will be 52.

Q3) Find the output of the following C program:

Answer) The value of f(5) can be computed using the following recursion tree since we can see recursive calls made:

Q4) Find the output of the following C++ program:

If the program results in error, mention a single change that should be done to resolve the error?

Answer) The first thing is that any constant object cannot be modified, so the statement *(pointer)++ will show an error as it tries to increment the value pointed by the constant pointer. Again there is also reassignment of a constant object to another variable which is not allowed. We can resolve the error by removing the const keyword from “const int *const pointer = &val;”.

Q5) What is the output of the following C program?

The above two lines are printed on the screen.

To understand, one needs to understand the volatile keyword and compiler optimizations done with normal variables.

Q6) What is the output of the following C++ program?

First, it’ll go inside the main function’s try block and call function func(). It creates a static object of class Second. It will create an object of first-class by calling its constructor, which will be printed, and an exception will be raised, and then it’ll go in the catch block straightaway.

Q7) What is the output of the following C++ program?

Answer) You won’t understand the above question if you are not well aware of “extern” and namespaces keywords in C++.

Hence the output will be 01.

Q8) What is the output of the following C program?

Answer) The above program will result in a compile-time error. The question requires having knowledge of structs in C.

So in a C structure, you can’t initialise the struct’s data members.

This is because your structs itself is declaring a data type.

Q10) Remove all occurrences of a character in the given string?

Answer) The approach for solving this question is quite simple. The aim is to remove a character given by the user from the input string. So what we can do is when we find the first character, which is the same as the given character, we will swap it with the next character in the input string (which is not the same as the given character). Now iterate from the index where the character has been swapped to and repeat the same process. Once the process is over, put ‘\0’ (NULL Character) at the end. Try out this problem Here.

Q11) Find out the output of the given C program:

Answer)  The above code will test your knowledge of recursion. Let’s use the recursion stack and understand it.

The output on the screen would be 9.

Q11) What do you mean by Embedded Systems?

Answer) An embedded system is a computer system based on microprocessors and integrated with software specifically designed to perform specific tasks and carry out real-time operations.

Q12) What is a Segmentation fault, and why is it caused?

Answer) Segmentation fault is a runtime error that crashes the execution of a program. It is caused because of several reasons.

It may be caused when we try to access nullptr or when the stack overflows, i.e., The amount of stack memory needed is greater than its maximum size available or while freeing a freed pointer.

Q13) What is the volatile keyword in C? Explain.

Answer) The volatile keyword is related to preventing objects declared as volatile from optimisations done by the compiler.

Any object declared as volatile is subject to an unexpected change in its value, i.e., its value could be changed abruptly by the compiler even if there is no change done on that object in the program.

Whenever an object is declared ‘volatile,’ its value is loaded from the memory registers rather than cache variables.

It’s used when we create global variables to interrupt service routines and when working with multithreaded programs.

Q14) What is the difference between const and volatile in C?

Answer) When we talk about volatile objects in C, the object’s value is not in control of the compiler, and no optimisations are made by the compiler while compiling the program. So this leads to abrupt changes in its values, and thus it’s always referenced from the memory registers.

Whereas, once an object is declared as constant, we cannot change the value throughout the program’s lifetime. If we try to modify the object, it will throw a compilation error.

Look at the above example of how volatile makes a difference.

Q15) What is the difference between malloc() and calloc() in C?

Answer) The key differences between malloc() and calloc() are:

Immediate response by the OS is to identify the type of the interrupt and call the corresponding subroutine for that particular interrupt. ISR doesn’t return anything. It contains a specific set of instructions to be performed, thus resolving the interrupt.

Answer) The NULL pointer is a particular type of pointer that doesn’t point to any memory locations. Earlier in C90, it was expressed as integer value 0 in a void pointer, but it clearly defined that it does not mean that it has any memory address as 0. Since it has no valid address, it can’t be dereferenced, and dereferencing it will result in a segmentation fault.

As a MACRO, a NULL pointer is present in many header files inside ‘stddef.h’,

Q18) What is an Interrupt Latency?

Answer) Latency means delay! So interrupt latency means the time elapsed between when an interrupt was encountered and when the Interrupt Service Routine serviced the interrupt.

Q19) What is the difference between RISC and CISC architectures?

Q20) What is the difference between typedef and macro?

Answer) The main difference between typedef and macro is that typedef is a keyword used for defining a user-defined name for an existing data type. This is done because while defining certain objects, the data types are a bit complicated.

Whereas a macro is a code fragment that a user-defined name can replace, and during compilation, it will be replaced by the original code fragment.

Q21) What will be the output of the following program when it’s run using a GCC compiler?

Answer) The program above is a compiler-specific program. The above program would compile on a GCC compiler, but it may not work if you try running the program on other C/C++ compilers.

The size of the void is considered to be 1 when we use GCC compilers.

Q22) What will be the output of the following program in C?

Answer) The output of the program is 1.

To understand this, one should know about pointers and how addresses are manipulated. The pointer arithmetic is a bit different from ordinary arithmetic. A pointer points to the address of the memory locations, and when we talk about pointer subtraction, it gives the  (difference between the addresses)/(size of data type)

Note: The difference between 2 pointers of the same data type = 1. But if two pointers of different data types are subtracted, they’ll return a compile-time error.

Q23) What will be the output of the following C program?

Answer) The answer you might be getting is 110, which is incorrect.

Q24) What will be the output of the following C program?

If we use the expression on RHS within brackets, then the last value is taken into account. Otherwise, it’s the first value.

But a is getting a garbage value (Why?).

Note: if a=b were, at last, the value of b printed would have been a garbage value too.

Q25) What will be the output of the following C program?

When we compare floats with doubles, only those float and double values terminating are equal; otherwise, they aren’t.

Q26) What will be the output of the following C program?

Answer) The above program would throw a compile-time error because the compiler will not find the right or left values.

Q27) What will be the output of the following C program?

Q28) What will be the output of the following C program?

Answer) The answer to the above program is 4. This question is generally asked by the interviewer to confuse the interviewee. So have strong basics to tackle these questions and get out of the interviewer’s trap. We know an integer pointer is 4 bytes. Thus ‘sizeof’ operator returns 4.

Q29) What will be the output of the following C program?

Answer) You must know about the “:” (colon) operator in C. The function of this operator is to take the specified number of bits from a given number. The number of bits to be taken is written after it.

For example, int p:3;  means that whatever value is assigned to ‘p’, only 3 bits will be considered.

Q30) What will be the output of the following C program?

Understand what happens when ++a is written; value of a is incremented by 1 and then a is returned there.

scanf() is a method in the “stdio.h” library that can take input from the console.

Where to practice C/C++ questions?

You can go to CodeStudio and practice Questions based on C/C++. It’s a great resource that’ll help you get stronger in these languages.

Hey! You have covered some great content. We hope you have learned some new concepts and are ready to crack the interviews having C/C++ questions.

Now, you may check out our course on Interview Preparation. It has a vast set of problems along with concepts that will help you to ace your interviews. So what are you waiting for?