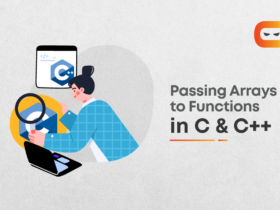 Passing Arrays to functions in C/C++

Sorting a stack is one of the frequently asked questions in interviews. Sorting a stack could be tricky and challenging, but don’t worry; today, in this article, we will discuss this problem in-depth and make it a cakewalk for you!

But before starting, let’s take a look at the problem statement.

“Given a stack, sort the elements inside it in ascending order using only push and pop operation.”

The problem statement is self-explanatory, and we could implement this in two ways: either by using recursion or a temporary stack.

In this blog, we would discuss sorting a stack using a temporary stack.

We have already discussed sorting a stack using recursion in this blog.

But before moving to a solution, let’s discuss some basics of stacks.

At any given time, one can only access the top element of a stack. Due to this reason, it is a LIFO (Last In First Out) data structure. In this, the element added last is accessed first. The time complexity for all operations in a stack is O(1), making it efficient and improving performance.

Check out Stack Notes to learn stack in detail.

Recommended: Please try to solve Reverse Stack Using Recursion on “CODESTUDIO” first before moving on to the solution.

Algorithm for sorting a stack

This approach of sorting a stack using a temporary stack is simple to implement. We will make a function sortStack() which returns a sorted stack.

For every element that we are popping from tempStack, we will push it into the input stack. We will perform this operation until the input stack becomes empty.

Below is the dry run of this pseudocode.

Below is the implementation of the algorithm for sorting a stack in c++. For simplicity, we will use the stack from C++ STL.

Time Complexity: O(n2) as in the worst case, we will pop each element from the tempStack repeatedly to insert a new element.

Space complexity: O(n) as we are using a tempStack to store the sorted elements.

You can also take a look at the recursive approach for sorting a stack here.

If you are a beginner in coding and want to learn DSA, you can look out for our guided path for DSA, which is absolutely free!

If you want to solve more problems like this which have been asked in the interviews, big tech giants like Amazon, Flipkart, Google, and Facebook, you can look out for interview problems at Code Studio.