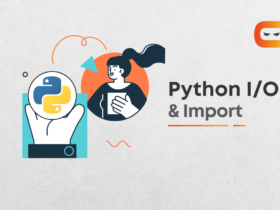 Input, Output(I/O) And Import In Python

As the time for placement season has started, there is a horde among the students to do something over the top to stand out in the interviews. Most of the students prepare for Data Structures and Algorithms and some take a taste of Development to spice up their resume.

Some put up some Internships whereas some people choose to do some certifications to validate their skills. But usually, students don’t look around one of the most important concepts that are required to be industry-ready, that is System Design. System Design Concepts are one of the most frequently asked questions in interviews.

What is System Design?

So for a formal definition, Systems Design is the process of defining elements of a system like modules, architecture, components and their interfaces and data for a system based on the specified requirements.

It is the process of defining, developing and designing systems that satisfies the specific needs and requirements of a business or organisation.

Why do we need System Design?

So here a big question arises: what is the need for System Design?

When we need to create systems that will cater to the needs of the masses, in that case, we need to think around and design the entire system in such a way that it’s modular and scalable. The system, on the whole, can be scalable if and only if the entire module structure of the system is scalable itself.

Now here another question arises: why make a scalable system?

So, as time passes and our system gets popular, more and more people will use the system concurrently and on a regular basis. As the load on the server increases the chances of a system failure increases as the load on the server will bottleneck the traffic and cause the CPU utilisation to increase many folds and reach a peak causing the server to crash under load and in return causes the entire system to fail.

The next question arises: why a modular system?

So if our system will not be modular and will be coupled closely, it will be difficult to introduce such a feature and will need a lot of refactoring. So each and everything is kept as modular as possible for producing a high quality, robust and reusable codebase.

The High-Level Design of a System is essentially used by Solution Architects, Business Analysts and Developers. The output of a High Level Design is Functional Design, Database Design and Review Records.

The Low-Level Design is used to define a system at a component level, basically in other words we can say that it is a High-Level Design of the components of a system.

The Low-Level Design of a System usually contains:

If we see System Design from an interview point of view, this round is generally open-ended, which means that there is no one answer to any question. It is usually more of a discussion around where you are tested on how you can think of a system.

One can always tell the Class Diagram, the Database Design or the Entity-Relationship Diagram but the interviewer will always try to find an extra plus point in you if you tell him something out of the box and discuss some in-depth points regarding System Design.

Each and every concept of System Design is as important as the rest but there are some frequently asked concepts that would prove beneficial if you know them.

Some of those frequently asked concepts are:

Caching means storing frequently and highly accessed data in a fast read location so that this data can be fetched indirectly from the server to reduce the read load on the server.

Let’s understand the concept of Caching with an example. Suppose there is a professional kitchen where there are multiple chefs working on a single station, multiple busboys and multiple servers serving the food to the guest.

All the essential things used for cooking like pans, ladles, spices and frequently used ingredients are kept near cooking stations in such a way that the chefs don’t have to roam about in the kitchen to collect the ingredients for the dish.

In this way, the system runs smoothly without any lags and issues. Each and every person has a different role and each thing is placed at a designated place according to its usage and user.

Similarly, all the static data that a user has to access from a system can be cached so that it can be accessed without any latency and burden on the system.

So commonly used caching systems are MemCache and Redis.

Databases are one of the most important parts of a system. It contains all the data that can be critical to the system. Each and every data element has a priority and based on that priority that data element is stored and saved.

For example, a user’s personal information is very sensitive data that should be protected at all times. Similarly, the data regarding money transactions is very critical for a business so it must be resilient.

On the other hand, a weblog is very important for debugging purposes for developers so must be stored keeping that in mind.

When we talk about databases, the modern system uses different database concepts like:

There are rules that we should keep in mind while designing databases and making Data Models and those are:

It will create a bottleneck and will cause our system to break eventually. So, to reduce such problems we need to balance the load across the servers.

There are two types of load balancing:

The answer is simple: the web applications are cross-platform. That is only a single code base has to be generated to run the application over different operating systems.

If you have to create a system as a desktop application, you need to write code for different types of operating systems. Windows will have a separate code and MacOS will support a different code.

But when we talk about web applications, only a single code has to be written to run our application on different types of systems.

This saves a lot of time, line of code and developing cost. This cost can in return be invested to scale our system and develop more and more complicated and extensive systems.

Servers are another important part of a system. Servers play a very vital role in executing the business logic and handling user requests.

But not every kind of server can cater to every need. A server is like a computer only but on a cloud which we can control remotely but we have no control over it physically.

Servers take up the cost to run. There are many cloud services like Amazon Web Services and Google Cloud Platform which provide cloud as a service. They have servers installed in their data centres for which we pay for use per minute.

We cannot keep all the servers running at the same time. So for that, we use a Scaling Group which terminates and creates servers according to the current load on the running servers.

Security is one of the most asked System Design concepts, one can easily encounter a question on How to make our system Secure in a placement interview.

Security concepts can be applied to any part of a system, be it user credentials or data. There are two commonly used constructs in security:

A student can change his details and view his marks, add his assignments and view them. Whereas a teacher can edit student details as well as his marks but cannot edit a student’s submission but remark it.

This is where Authorisation comes into play to differentiate which user is allowed to perform which function on the system.

When we have created such an extensive system, we don’t want users to face any delay, downtime or slow read times on the system.

For this the Optimisation comes into play where we try to remove the redundancy from a system’s design.

Optimisation can be of any form from reducing size of images to reducing the data fetched in a query to indexing the data to reduce read times.

Some ways for optimising the system:

There can be multiple concepts that can be asked in a System Design Interview but there are some questions that are interview favourites and you are likely to encounter them very frequently in an interview. Some of them are:

What is a systems design interview?

An Interview in which you are asked about different system design concepts like caching, databases and security to test how well in-depth you can imagine a system as well as how modular we can make a system.

How do you prepare for a design interview?

Systems Design Interviews can be both smooth and bouncy depending on what things are asked in the interview. One can always prepare for System Design Interviews by studying some basic concepts like Data Modelling, Optimisation, OOPS (Object Oriented Programming Structure) and Class Diagrams.

How do I prepare for system design rounds?

You can always start by taking up any pre-existing system and try to make a model for it. Or you can read about different concepts of System Design. You can also take up a course on system design like Coding Ninjas has to offer one on the topic.

It is a totally subjective question. The hardness of a topic generally depends on the person who is learning it. But for a general answer if you are a fresher you might need some time to sink into the topics and might have to look around multiple resources. But for a working professional, it might not be that difficult.

What do you look for in a system design interview?

Systems Design Interviews are known to be lengthy and full of discussion. These interviews are open-ended as there cannot be a single right answer to a question. One can always expect a rebuttal round where the interviewer can ask about the design and architectural reliability of the solution you proposed.

To summarise the entire discussion on System Design Concepts, I will just say that there are numerous things that could be asked in a systems design interview. One should always try to stick to the approach that one has started with and should always try to add more and more components in the system than he can think of.

Try to learn about more and more concepts but don’t use the concepts which you are unaware of or know very little about. Try to visualise the approach, make flowcharts, class diagrams and data flow models to get the best out of a System Design.