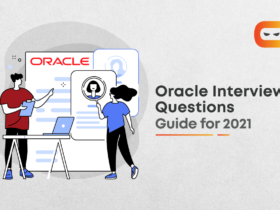 Top 20 Oracle Interview Questions You Should Master in 2021

Consider a situation where you are writing a Java program for calculating the percentage of every student in the Computer Science Department of your university. There are approximately 100 students and for the sake of simplicity, let’s consider that you only need to sum the marks of five subjects for each of the 100 students.

So, in a nutshell, you are required to display the percentage of each student by their marks. Sounds quite simple right?

All you need to do is sum up the marks obtained in each subject and then divide by the total marks for a single student. Now for 100 students, this task needs to be repeated, which means executing the same logic 100 times!

Here Java Method comes to the rescue. Using functions in the above example will allow us to write the logic for percentage calculation once and use it 100 times.

A method is a group of statements or a block of code that performs some specific operations on data passed to it and may or may not return a result.

Methods provide “Write Once, use many times” functionality. Structuring your code using methods provides better readability and helps in the reusability of code. There is no need to retype the same code over and over again.

A method is executed only when it is explicitly called upon, bypassing specific parameters as arguments.

How is a method declared?

The method declaration is composed of the following main parts:-

Let’s try to understand the various elements of method declaration using an example as illustrated below:

The starting point of the Java program i.e. public static void main(String[]args) is too a method and the most crucial one. Let’s try to break down the most important method of Java programming Language

Every method has a Method Signature associated with it. Method signature includes the method name and the parameters list.

Now you know how to create a method and the various terminologies associated with the creation of a method. But how to use that method? For using a method, it needs to be invoked, i.e., called from somewhere within the main method, inside another method, etc.

Every java program is executed sequentially, i.e., one instruction is executed only after the previous one has completed its execution. Whenever the method is called, the control gets transferred to the method. The control is returned to the main method or to the caller when:

The example below illustrates how to define a method that may or may not return a value and call it within the main function.

Note that the methods that do not return any value are called void methods. In the example above, findGrade() is a void method.

There are two types of methods in the Java programming language.

The necessary condition for using an in-built method is to import the required Packages as shown in the below examples.

Methods can also be classified into the following types:

The below program illustrates the difference between static and instance methods.

An abstract method can only be declared inside an abstract class

When more than one method of the same name is created in a class, this method is called an overloaded method.

This will produce the following result:

In the above example, we do not explicitly specify the integer method, float method, or no argument method. The Java compiler itself is capable of performing the appropriate method call for an object based on the data type of the argument/parameter passed to it.

The Java Virtual Machine(JVM)  divides the memory into stacks and heaps. The stack memory may grow and shrink as and when required. Any variable defined in the stack lasts as long as the scope of the method exists. To keep track of the method calls, they are implemented using a Stack.

Whenever a method is called, a new stack frame is created. Within the stack frame, all the variables and the arguments passed to it are stored. The stack frame would be deleted as and when the execution of the method is done.

What are the methods in Java?

A method in Java is a block of code or a group of statements that performs a specific operation and is executed only when it is being explicitly called. The method may or may not return a value and may or may not have parameters passed to it as arguments.

The above method, when called inside the main method, will print Java Methods as Output.

How can we call a method in Java?

A method needs to be called to leverage its functionality as and when required. There are different ways of calling a method depending on whether it returns a value or not.

How many main methods are there in Java?

There is only one main method, written as public static void main(String[] args), from which the execution of the program begins in a class.

However, there can be more than one method with the name main in case of method overloading bypassing no arguments or a different set of arguments. The below program will compile successfully.

What are String [] args in Java?

String[] args in Java is used for storing command line arguments, and it’s an array of type java.lang.String class.

Don’t forget to upgrade yourself using various problems available on CodeStudio and read about the interview experiences of scholars placed in top product-based companies.