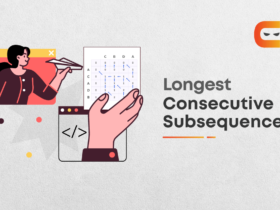 A computer program is a set of instructions that tells the computer to perform a specific task. Every program, whether it’s as simple as adding two numbers or as complex as sending the request over a web server, is written in High-level language like Java, Python, C.

In simple terms, consider that you only understand English and someone is speaking to you in french. You are unable to process what the person speaking in french is trying to convey. So, to understand French, you hire a person who will do the translation job for you, i.e., translating French to English.

That’s what compilers and interpreters do; they take the program written in a high-level language and translate it to machine languages. Read out the full blog for more information and get a clear explanation of Compiled vs Interpreted Languages.

Consider the above program wherein a message, “Compiled vs Interpreted Languages”, is displayed to the programmer. The source code is written in C Programming Language, which is a high-level language. The above program will execute sequentially, i.e., one line is executed only after the previous one has completed its execution.

But as we saw in the example of French to English translation, and from the fact that computers only understand the language of 0s and 1s, it can be inferred that this program cannot execute directly on the Computer; this needs to be translated to Machine Language to be able to run on the Computer.

Compilers and Interpreters handle the job of translation.

In the example of French to English Translation, the person we hire to do the translation can do it in two ways:

Translation Line by Line is what an Interpreter does. Translation of the whole program at once is what a compiler does.

Based on how the translator works, i.e., either line by line or complete program in one go, the Programming Languages can be categorized as Compiled Languages and Interpreted Languages.

Compiled Languages make use of the Compiler to translate high-level source code into Low-level Machine code. The Compiler will scan the complete source code at once and then generate a binary file called executable code or object code (which is undecipherable by humans). The source code is directly translated into Machine code that the processor can execute.

How does it work?

Due to the architecture-specific nature of the compiled code, there are different compilers for the various operating systems and different architectures of the system.

An example is, whenever you open a website with JavaScript, the JavaScript is sent to you over the web along with a bunch of other files like images and webpages and is being rendered as source code to your machine, and the web browser interprets it on the fly.

How does it work?

An interpreted program is ready to run on all types of machines.

Difference between Compiled and Interpreted Language

The differences between Compiled vs Interpreted languages are summarised in the table below:

Is Python a compiled or interpreted language? What is the difference?

Source code written in Python programming language (.py extension) is first compiled to bytecode (.pyc extension), This bytecode can be interpreted (official CPython) or JIT Compiled (PyPy). So effectively, the compilation part is done when the first time source code is executed, a bytecode is generated, and internally this byte code gets converted by Python Virtual Machine according to the Platform.

Are all interpreted languages compiled?

Is C++ an interpretive language?

C++ is a compiled language because it uses a compiler to translate the source code into an object code. This object code is converted to the executable for the end-users to run.

What is a compiled language?

Why is C called compiled language?

C is called compiled language because it uses a compiler for the translation of source code to machine code. The .c file is converted to a .exe file which can then be executed directly by the Computer’s CPU. Also, a .c program compiled in one system cannot be executed in another system if the second system has a different architecture.

Why is Python called an interpreted language?

This blog covered an in-depth analysis of compiled and interpreted programming languages. The blog aimed to give a clear understanding of how compilation and interpretation work and the main differences between Compiled vs Interpreted languages.

With this done, you can now figure out more details about compilation, how a compiler works, and how it generates the byte code. Don’t stop here, do check out Coding Ninjas for amazing courses and guided paths.

Remember, “Success is the sum of small efforts repeated.” So, BE CURIOUS!