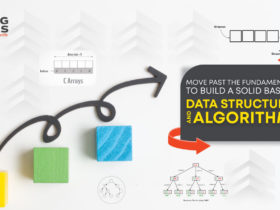 Tips To Improve Your Data Structures and Algorithms

Almost everyone enjoys a tasty slice of cake every now and then, but have you ever thought of baking one?

To bake a cake, we will first need a recipe. In this recipe, the proper measurements of each ingredient are given, and it is crucial to adhere to them. But why?

Similarly, the mathematical analysis of complexity is an integral part of it, which is done with the help of Asymptotic Notations.

Also, by analysing the time and effort required for a particular recipe, we can develop new recipes to increase our productivity.

Similarly, we can compare different algorithms concerning their asymptotic analysis and develop better ones in the case of complexity.  Therefore, Asymptotic notations help us analyse the complexity of an algorithm to choose which one is the best. That’s an essential part of being a good programmer.

So, in the article, we will be discussing the different asymptotic notations used to express the complexity of an algorithm.

What are Asymptotic Notations?

As we already know, It helps us to analyse the complexity of an algorithm. But how exactly is it?

To understand that, we will first have to understand the concept of asymptotic analysis. For a particular algorithm, there is a variation in the complexity due to the different input cases.

For example, consider the program to create a 2-D array as follows:

Here, the complexity will vary according to the dimensions of the array given by the user. If the user gives the dimensions as 1,1, then that will be the most straightforward case, and the worst case will be (M x N), where M and N are integers.

This is what is called Asymptotic analysis.

Therefore to define it, Analysing the best case and worst case performance of an algorithm by its inputs is known as asymptotic analysis.

Now, after analysing the performance of the algorithm, we must represent it using some mathematical function. Asymptotic Notations such as Big O, Big Ω and Big Θ are used to accomplish it.

But this doesn’t sound very clear.

So we represent it mathematically as a function of the variable as follows:

Similarly, Asymptotic notations represent the complexity as a function of the input variable. As you may have heard, some algorithms have an O(N) time complexity. Stay tuned as we will go over it in detail in the next section.

Therefore, we can define Asymptotic notation as follows:

Asymptotic notations are the mathematical representation of the complexity of an algorithm as a function of the input variable, giving us upper and lower bounds to the run-time.

Now, we already know what asymptotic notations are, but you may have heard of best-case, worst-case and average-case scenarios for an algorithm. So let’s find out what those are before proceeding any further.

To understand this, let us consider the example of linear search. Do you know what Linear Search is? Take a look here.

Suppose we want to find the number 5 in the following array:

As you can see, by linear search, we will find five in the very first iteration of the loop. So, this is the best-case scenario since the loop will run only once, and therefore the run-time will be the least possible.

The best-case complexity for any algorithm is always a function of 1 and is represented as O(1).

To understand this, let us again consider our previous example. Again we want to find 5 using linear search, but the elements in the array will be in a different order.

Here, 5 is the last element, and we will find it in the last iteration using linear search. So, this is the worst-case scenario where the loop will run the maximum number of times. The run-time will also be the maximum value possible.

Let us again consider the same example but with the array elements arranged differently.

Here, the element we are searching for, 5, is present precisely in the middle. So, the complexity will be average, and the run-time will be the average time taken.

The average-case complexity also varies with algorithms, but have you noticed anything interesting about the example above?

If not, let’s find out what it is.

Let us now see the different kinds of Asymptotic notations used to represent the best, worst and average-case complexity of an algorithm.

In the article, you may have noticed that I have used only Big O notation to represent the complexities.

So, is that the only kind of asymptotic notation?

As you can see from the graph, f(n) does not exceed c.g(n) for any value of n≥ n0. Therefore, the complexity is defined such that it has an upper bound.

Before considering the example of an algorithm, let’s consider a general example. If I have ten candies in my pocket, I can say that I have less than 100 candies, providing an upper bound.

In the case of, let’s say, binary search, the maximum number of iterations (worst-case scenario) will be log n, so the complexity in Big O notation is O(log n).

Big Ω notation is similar to Big O notation but is exactly the opposite of it. It represents the best-case complexity of an algorithm, thereby providing a lower bound to the complexity. It is defined as follows:

This is graphically represented as follows:

According to Big Ω notation, if I have ten candies in my pocket, I can always say I have more than one candy.

The last case of complexity we will discuss is an average-case complexity denoted by Big Θ notation. So, you can guess, It gives an upper and a lower bound to the complexity of an algorithm.

Mathematically, it is represented as follows:

Graphically, the function is:

It is evident from the graph that the complexity f(n) is bound by an upper limit c2.g(n) and a lower limit c1.g(n).

In Big Θ notation, if I have ten candies in my pocket, I can say I have less than 100 candies, but more than one candy.

The for loop in this function will run at least n times, but it will also run a maximum of n times.

It is like saying a ≤ b and b ≤ a, which implies that a = b (here, a and b are two numbers). Therefore, Big-Theta is either the algorithm’s exact performance value or a good range between narrow upper and lower bounds.

Now that we know the different kinds of asymptotic notations let us see the differences between them at a glance.

There are many functions in asymptotic notations. Let us understand them by considering a simple example.

Suppose a boy has lost his glasses somewhere in his classroom. Now, to find it, he wants to ask his classmates. We will consider different methods to find the glasses, from which we’ll get to know about the various functions in asymptotic notations.

Note: Although all the functions are mentioned in the Big O notation (to consider the worst-case scenario), they exist in the other notations too.

Therefore, the complexity here is a function of O(log n).

So, the maximum number of times asked will be:

Therefore, the complexity here will be a function of O(n!). The graph below shows the variation of the different functions of complexity with a varying number of items.

As you can see, O(1) has the minimum complexity and is the best-case scenario, while O(n!) happens to be the most complex.

The functions mentioned above are most commonly encountered while calculating the complexity.

Apart from these, there is also a linear log function (NlogN), exponential function (2n), cubic function (n3), and the list is endless.  Need a recap of Time and Space Complexity? No worry, you can go through a blog on it here.

What are the three basic asymptotic notations?

Which asymptotic notation is best?

While analysing the complexity of an algorithm asymptotically, it is best to consider the worst-case scenario, and so Big O notation is the best.

What is the significance of asymptotic notation?

Asymptotic notations help us to analyse an algorithm and choose one over the other based on their complexity.

How is Big O complexity calculated?

How do you calculate the worst case and best case complexities?

What is Big theta notation?

Big Θ notation is used to find the average-case complexity, thereby providing both an upper and a lower bound to the complexity.

What is the difference between Big O, Big Omega, and Big Theta notations?

In this article, we learned what asymptotic notations are, their different types and how to calculate them. We also saw various functions used to express the complexity.

Now that we know how to analyze the complexity of an algorithm mathematically, we can easily compare algorithms and choose the best one. It will help us assimilate good coding practice.

Do you want to learn about different types of algorithms? Remember to read our blog on Algorithm Types and Applications.

But as always, practice is the key. So, don’t forget to practice DSA problems from CodeStudio. This will help you keep interview questions at your fingertips, with the bonus of interview experiences of scholars in big product-based companies.