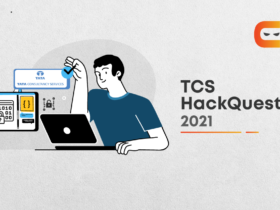 A Quick Round-Up On TCS HackQuest 2021

The scanf() function is a widely used function in C/C++. Although the syntax to use it is simple, it is important to understand some areas where its usage would require careful handling. One such area is when fgets() is used after scanf().

In this article, we will address this problem of how fgets() doesn’t work after scanf() and also derive the solutions to it. Before that let’s understand how the scanf() and fgets() functions work.

The scanf() is a function in the C library that reads formatted data from the standard input stream and then writes the output into the given arguments. This function is declared as follows:

Let’s discuss the various aspects of this declaration.

The scanf() function is part of a family of functions that essentially have the same purpose but read the input from other sources. For example, fscanf() reads from the file stream and sscanf() reads from a null-terminated string buffer.

Here is a small example of how we use the scanf() function:

The fgets in the fgets() function stands for ‘file get string’. This is essentially a function that is used to read up to n characters from the stream (file stream or standard input stream) into string str. It is declared as:

Let’s discuss every aspect of this declaration.

Let’s take an example to understand how fgets() reads from a file.

The fgets() function terminates its operation if one of the following conditions is fulfilled. These conditions will be important to keep in mind during our discussion on why fgets() doesn’t work after scanf().

Problem with using fgets() after scanf()

Now that we know how the fgets() and scanf() functions work, let’s look at what happens if we use the fgets() function right after the scanf()function and whether fgets() doesn’t work after scanf().

We can see here that the string “Ninja” is not printed. What is the reason behind this? The problem is because of a certain feature of the scanf() function.

This feature of scanf() is something that is important to note whenever we use this function. But now the question is, is there a solution to this problem of how fgets() doesn’t work after scanf()? How do you print the string “Ninjas” as well?

The solution to the problem

After assessing the problem of why fgets() doesn’t work after scanf(), it is time to derive a solution. Observe the code below.

Do you see the difference? We have introduced an extra “\n” in scanf(“%d\n”, &x). By doing this, we make scanf() read a new line. We can also achieve this by

Therefore, the fgets() will not have to read the newline and will read the string input. Thus solving the problem of how fgets() doesn’t work after scanf().

How do I make Fgets work after scanf?

Why fgets doesn’t work after scanf?

This can be solved by introducing a “\n” in scanf() as in scanf(“%d\n”, &x) or by adding getchar() after scanf(). The fgets() function then read this newline character and terminated operation.

Is Fgets better than Scanf?

There are certain aspects to look at before deciding so. fgets() can read from any file stream but scanf() only reads from standard input.

What is the syntax for using scanf()?

What is the syntax for using fgets()?

What does Scanf return in C?

Scanf returns the total number of inputs successful or EoF(End of Line) if there is an error.