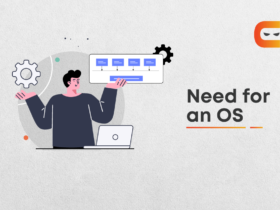 Why Is There A Need For An Operating System?

In a perfect world, end-users would never enter data incorrectly. Files they wish to open would always exist. And programming would never have flaws. So far, we’ve primarily presented code as if we lived in a world where everything is fine. Now it’s time to look at the techniques for dealing with insufficient data and faulty code in the real world.

So, let’s get started without further ado.

The five main clauses in exception handling are:

Exceptions that can be handled using Exception Handling

All exceptions descend from the Throwable parent class. But the hierarchy quickly divides into two branches: Error and Exception.

The general rule is: A RuntimeException happens because the programmer made a programming error. Any other exception occurs because some other thing, such as an I/O error, happened. The compiler checks for exceptional handlers for all the checked or compile-time exceptions.

Inside the Java run-time system, the Error hierarchy defines internal errors and resource exhaust situations. A program should never throw this type of object. If an internal error occurs, a programmer has no choice but to warn the user and manually exit the program. These are highly uncommon circumstances.

Thus Exceptions are recoverable and can be handled by exception handling techniques, whereas Errors are irrecoverable and lead to abnormal termination of the program.

An Overview of Exception Handling in Java

An exception object in the Java programming language is always an instance of a Throwable-derived class.

Missed out the basics of exception or looking to revisit the fundamental concepts, don’t worry!

Coding Ninjas has got you covered with a basic introduction to exceptions, their type, and hierarchy.

“The main goal of exception handling in Java is to transfer the control from where the error occurred to an error handler that can manage the situation.”

Suppose a Java program encounters an error while it is running. The programmer wants his code to react appropriately. If an operation fails due to an error, the program should either:

A Java method must declare the types of checked exceptions it may throw, using the keyword “throws” in its signature.

For example, consider the declaration of the below-given method. After the throws keyword, the name of the potential exceptions is mentioned that the program may encounter during execution.

A program can throw an exception if it encounters a situation it cannot handle using the keyword “throw”. In other words, When a Java program encounters an abnormal situation, the method having the incorrect code should create an appropriate exception object and throw it to the JVM using the below statement.

For example, suppose a method method1() declares that it may throw Exception1 and Exception2 in its signature, as follows:

There are two ways in which we can use method1 in our program.

1. Via a call to method1() inside a try-catch or try-catch-finally as given below.

2. If method2(), which calls method1(), does not want to handle exceptions with a try-catch, it can specify these exceptions to be thrown up the call stack as follows.

The first step in creating an exception handler is to use a try block to enclose any code that might throw an exception.

A try block looks something like this in general:

Displaying a Description of an Exception

To display the description of an exception, simply pass the exception as an argument to the print method.

The below-given program is an implementation of the above problem:

Note: Exception handlers are capable of much more than simply printing error messages or terminating the program. They can utilise chained exceptions to accomplish error recovery. They can prompt the user to decide or propagate the error up to a higher-level handler.

A situation may occur in which a part of a block causes one error, and the complete block causes another error. Exception handlers must be nested in such cases.

In the same manner, we can employ a try block within a try block in Java. The context of an exception is pushed into a stack each time a try statement is entered.

An example of nested try blocks is shown below.

Example1: To handle an ArithmeticException, an inner try block is used in this example. The outer try block then handles the ArrayIndexOutOfBoundsException.

Example2: Another example of how the nested try block works can be seen here. Inside the body of the parent try block, you can see two try-catch blocks.

Need more insights about the try Block, you can refer to the official java documentation here.

Control flow in try-catch or try-catch-finally

The flow control in all the various combinations of try, catch, and finally, blocks are explained below:

1. Exception occurs in the try block and handled in the catch block

2. Exception occurred in try-block is not handled in catch block:

In this situation, the catch block is never executed because it is only supposed to be executed when an exception occurs. If a final block exists, it will be executed before the rest of the program.

Important points regarding the finally block are given below:

Refer to this code snippet from java documentation explaining the above utility:

In this example, a finally block has been used to ensure that a resource is closed, regardless of whether the try statement executes normally or is terminated abruptly.

What are the five keywords used in java exception handling?

How are the exceptions handled in Java? Specify one method.

The most basic method of handling exceptions is try-catch. Put the code in the try block, and any Java exceptions the code throws will be caught by one or more catch blocks followed by the try block.

Which keyword is used to throw an exception?

Can we throw an exception manually?

Can we catch and throw the same exception in a program?

We can do things like this in the catch block and then rethrow the exception. As a result, a higher level is notified that a system exception has occurred.

This article is designed so that it is helpful for both beginners and those preparing for placements and other tests.

Here’s a step-by-step guide to help you get the most out of this series.

But, some of us have limited resources.

As an initiative towards “Knowledge for all”, Coding Ninjas has brought a few free courses. The free courses cover an essential level of programming so that each student or IT enthusiast is at least familiar with the basic programming concepts.

So, Gear up, and start exploring and build up your concepts.