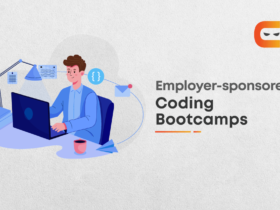 How to Get Your Coding Bootcamp Sponsored by Your Employer?

Are you looking for or dreaming of cracking jobs in top product-based companies like Amazon, Flipkart, Google, etc? Then you must know that competitive coding and data structures are quintessential topics to master, as they add a lot of value to your resume.

You need to practice data structures and algorithms problems every day to be good at them. One such important problem that is asked in many interviews is finding the Fibonacci series. This problem has many different approaches in different languages.

The article is completely written in python as it is one of the most popular and widely used languages.

In mathematical terms, the sequence Fn of Fibonacci numbers is defined by the recursive function.

We have many methods to find the Fibonacci series some are:

The idea is to call the Fibonacci of n-1 and n-2 to get the nth Fibonacci number. The function would return 0 for 0, and 1 for 1.

In the above program, first, we will check if n<0 so that the program prints Incorrect input. If n is greater than 0, we have two different options again. The basic idea is, to sum up, the n-1 and n-2 elements in the loop.

When the input is taken, the process is done in a while loop. Here we swap a, b, and add them. Here a,b are pre-initialised in the program.

How do you print the Fibonacci series in Python?

A Fibonacci sequence is the integer sequence of 0, 1, 1, 2, 3, 5, 8… The first two terms are 0 and 1. All other terms are obtained by adding the preceding two terms. This means the nth term is the sum of (n-1)th and (n-2)th term. The same pattern is followed for every programming language.

What is the Fibonacci series in Python using for-loop?

The Fibonacci series in python using for-loop is the same as while-loop. The code completely works fine. You need to convert the while condition to a for loop condition.

Is there a Fibonacci function in Python?

No, there is no Fibonacci function in python that is built-in. You can just add the function name into your class, and you can inherit it into your code if you want.

Is 0 a Fibonacci number?

The Fibonacci sequence is a series of numbers, where a number is the sum of the last two numbers, starting with 0 and 1. So 0 is one of the Fibonacci numbers.

What is the end in Python?

The end parameter is used to append any string at the end of the output of the print statement in python. By default, the print method ends with a newline.

This blog explained the methods to print the first ‘n’ elements using:

Practicing more problems on competitive coding can help you to stand out from the crowd during interviews. There are many questions to practice in data structures and algorithms to get into top product-based companies.

This article discusses methods like recursion, dynamic programming, and space optimization. To solve more questions for interviews you can check out CodeStudio, a platform developed by experts, where you can find all previous interview questions.

Keep practicing, Keep hustling, The goal is near!