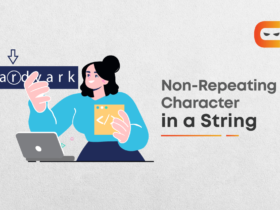 What Is Non-Repeating Character In A String?

Polymorphism is the capability of an object of a class to behave differently in response to a message or an action.

It occurs when the same object acts differently depending on the situation. We can gain flexibility in our code by utilising polymorphism, which allows us to do different actions by employing the same names based on the needs.

For instance, ‘Human’ is a subclass of a ‘Mammal’. Similarly, ‘Dog’, ‘Cat’ are also subclasses of ‘Mammal’. Mammals can see through daylight. So, if the message “day vision” is passed to all mammals, they all behave alike.

On the other hand, if the object “night vision” is passed to cats only, humans and Dogs will not be able to view at night, whereas cats will have vision during the night also. Here cats can behave differently than other mammals in response to a message or action. This is polymorphism.

Depending on how the class method is called, Polymorphism in Java can be categorised into two types:

Let’s dig a little deeper into compile-time and run-time polymorphism in Java:

The compiler examines the method signature at compile time and determines which method to invoke for a given method call. Since it is exhibited during compile time, it is called Compile-Time Polymorphism. It is also known as static polymorphism, early binding or overloading.

Method Overloading is one of the ways to implement compile-time polymorphism in Java. Constructor Overloading and Method Hiding are two more examples of this polymorphism.

Method Overloading occurs when a class has many methods with the same name but different parameters or different data types.

What are the benefits of method overloading? It improves the readability of the programme.

In Java, we have two ways to overload the method.

Method 1: By changing the number of parameters

Both the methods are called in the main, and the compiler decides which method will be invoked at compile time.

Method 2: By changing the data types of parameters

Can we overload a method by changing its return type?

Method overloading in java is impossible by changing the method’s return type as there may occur ambiguity.

The example given below depicts how ambiguity may occur:

Here, a compilation error occurs, so this depicts that even after changing the return types of the methods, we cannot achieve compile-time polymorphism.

A polymorphism that collects the information to call a method during runtime. It is also known as dynamic, late binding or overriding. In addition, it is called run-time polymorphism as it is exhibited at runtime. Java Virtual Machine (JVM) determines which method call will be invoked with the method body at runtime.

Method overriding is used to implement dynamic or runtime polymorphism in Java. A derived or child class overrides a base or a parent class method to offer a more specialised implementation. The method is the same in both parent and child classes, and the only difference is how it is implemented.

Before moving forward, let’s take a look at upcasting:

Upcasting occurs when a reference variable in the Parent class refers to an object in the Child class. In Java, we use this to resolve the overridden methods at run time.

The Example given below depicts how upcasting is done.

Here, upcasting happens when the superclass named parent’s reference variable refers to the object of its subclass child. This is the way we override methods from the base class to the inherited classes to achieve runtime polymorphism.

Let’s look at some examples of runtime polymorphism:

The following example explains it:

Let’s quickly look at some fundamental differences between compile-time and run-time Polymorphism in Java:

What are compile-time and run-time polymorphism examples?

Method Overloading is the example of compile-time and run-time polymorphism on the other hand has Method Overriding as its example.

How does the Java compiler differentiate between methods in compile-time polymorphism?

Java determines which method to invoke at compile time by looking at the method signatures. Compile-time polymorphism is also known as static or early binding.

Why is overriding called runtime polymorphism?

You create a new definition for the same function signature when you override a function. It is just the kind of object or pointer that determines which function is invoked. As a result, you’re calling various function definitions with the same function name. The same data is being used for multiple purposes.

Can we override the static method? Explain in detail?

No, we cannot override the static method as the concept of Method Overriding is based on Dynamic Binding at runtime whereas static methods are bonded at compile time using static binding. Therefore, though we can specify static methods in the subclass with the same signature, this is not considered overriding because there would be no run-time polymorphism.

What happens when we override a final method?

A child class cannot override a final method declared in the Parent class. This is because the compiler will throw an error if we try to override the final method at compilation time. Hence, the methods that are declared as final cannot be Overridden or hidden.

Can we override the main method?