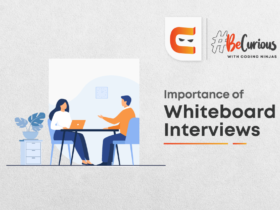 A coding interview is a rigorous test of your data structures and algorithms abilities. Numerous programmers and mathematicians have made our lives easier by creating algorithms that can be used directly for approaching and optimizing a particular problem.

In this article, we will be looking at five standard algorithms that you should be well prepared with for acing your coding interview. After the explanation of every algorithm, a set of problems that you can practice has also been provided.

The best way to learn is to make notes as you go. Therefore it is highly recommended to make notes from little details that are mentioned in the article on coding interview. In addition to this, you can also utilise peer to peer learning by gathering your friend group and solving the problems given in this article together.

Kadane’s Algorithm is used to solve the famous problem of finding the maximum sum subarray in a given array.

Example:
Given array = [-1,2,-2,5,7,-3,1] and the maximum sum subarray for this will be 12 [2,-2,5,7].
The current sum gets updated as the array is traversed, if the current sum is less than zero then it is set to 0. The maxsum is updated by comparing the previous maxsum and the current sum after every iteration.

The Dutch National Flag Algorithm is an algorithm that is used to solve the popular sort 0 1 2 problems with ease and in O(N) time. The approach is fairly simple, you have to create three variables, low, mid and high were low and midpoint to the start of the array and high points to the end of the array.

After the sorting has been performed the elements between low and mid will be 0, between mid and high will be 1 and after high will be 2. When you encounter a 0 at the index where mid is pointing, swap mid and low and increment the mid pointer by 1.

The time complexity of the dutch national flag algorithm is O(N) as we are traversing the array only once and the space complexity is O(1) as there is no extra storage used.

The two-pointers technique is a technique where two-pointers are used to keep track of different indices. The pointers can start together from the same index or they can start from opposite directions in the array. This technique is useful for comparisons and traversing the array quickly while keeping a check on two elements simultaneously.

The sliding window algorithm proves to be extremely vital while solving questions on strings and arrays. This technique helps in lowering down the time complexity from O(N^2) to O(N).

Recursion is the algorithm by the virtue of which a given problem can be divided into smaller problems that can be solved with ease. To identify if a function is recursive, you can see if that function is calling itself and if that is the case, we say that the given function is a recursive function.

Every recursive function consists of three parts – base case. recursive call and function computations. The base case indicates the condition where the recursion needs to stop, in the absence of a base case, the function will call itself infinitely and cause a TLE in your program.

Given below is the recursive algorithm for finding the factorial of a number:

The divide and conquer algorithm is an extension of the recursive algorithm where a given problem is divided into subproblems and then each subproblem is solved separately and recursively (the conquer step) after which the answers to these subproblems are combined to make a final answer.

Read more about Types Of Algorithm and Their Uses

Popular problems like N-Queens, Rat Maze, Sudoku, Maze Path etc. can be solved using backtracking. It is also used in popular knapsack problems. Backtracking is extremely easy to understand and using this, one can come up with a solution very quickly.

Mixed Problems for Practice (Recursion, Divide and Conquer, and Backtracking)

During recursion, the same calls and computations are made repeatedly. When dealing with large data, this could cause overflows and generate a time limit exceeded error. To cope up with this issue, dynamic programming comes into the picture which stores the already computed values and makes them available so that the program does not have to re-compute the values.

There are two ways to traverse graphs – breadth first and depth first.

What algorithms are you able to implement during the interview using any programming language?

All the algorithms can be implemented by using any programming language.

How do you ace the coding interview?

To ace a coding interview, you are supposed to be well versed with data structures, algorithms and computer fundamentals.

Which sorting algorithms are asked in interviews?

What is the fastest sorting algorithm?

Quicksort is the fastest sorting algorithm.

The above mentioned 10 algorithms are standard algorithms that everyone should be well versed with before appearing for a coding interview. These algorithms will help you in impressing your interviewer in a coding interview as you will be able to optimise your code more efficiently than the students who are only able to tell the brute force approaches to a particular problem.

Programming is all about ensuring that your resources of time and space are utilised efficiently and algorithms help in the same. Learn algorithms in depth along with understanding their time complexities.