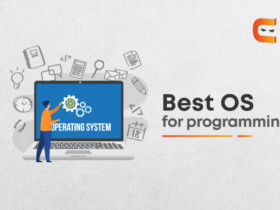 The Best Operating System for Programming in 2021

In this operating system tutorial, we will be reading about how Operating systems are the link between the user and the computer. It enables the users to smoothly interact with the machine and instruct the machine to undertake different operations. Windows, Mac, Android are some of the popular operating systems that you definitely must have come across.

It is the operating systems that have made our lives easier by giving us a medium to make our machines easily understand what we require them to do.

There are different kinds of operating systems. Some of them which are used widely are mentioned below:

Just as the cell is the basic unit of life, a thread is the basic unit of CPU utilization. Processes use threads to perform their tasks and if a process is using multiple threads at once, it is said to be a multi-tasking process. While threads are independent they are also interdependent as they share resources revolving around the same process with each other to ensure smooth execution of the process.

What is Process Scheduling?

Process scheduling as the name suggests is a paradigm by the virtue of which the CPU can be utilized in the best way possible by ensuring that each process gets executed in time and multiple processes can be executed at the same time. Process scheduling enables the operating system to work faster as one process does not have to wait for the previous process to complete its execution.

You will be provided with different processes, their duration, arrival order, and arrival time. To implement the first come first serve process, you have to execute the processes in the order of their arrival. Take input of each process with their burst time.

As the name suggests, the shortest job first algorithm puts that process first which has the shortest execution time thereby reducing the average waiting time. In the preemptive form of the SJF process scheduling, the processes are put inside the ready queue immediately as they arrive.

For the complete C++ code, check out this repository by pvsmounish.

The difference of the non-preemptive version of the shortest job first process scheduling algorithm is that one process when put for execution will be executed completely before a new process is taken.
For the complete C++ code, check out this repository by pvsmounish.

The difference that the non-preemptive version of the priority scheduling algorithm possesses is that when one process is put for execution, no other process even if it has a higher priority will be added unless the current process has finished its execution. For the complete C++ code, check out this repository by pvsmounish.

The Round Robin Process Scheduling algorithm executes processes in a cyclic manner where each process is executed for a certain time span called the time quantum. For the complete C++ code, check out this repository by pvsmounish.

A deadlock is a situation where a process gets blocked because some other process is utilising a resource our current process requires. There are four necessary conditions that need to hold true together for a deadlock to occur:

There are three ways to handle and do away with deadlocks, given below:

To check out the program in C refer to this GitHub repository by pateldevang.

For this algorithm, the page which is least recently used will be replaced during page replacement. To check out the program in C refer to this GitHub repository by pateldevang.

For this page replacement algorithm, the page which has not been used for the longest duration is picked for being replaced. This is an ideal page replacement process and is generally not used in real-life scenarios.

To check out the program in C refer to this GitHub repository by pateldevang.

What is memory management in an operating system?

Memory management in an operating system is a technique to handle different memory resources and allot them as per their use and requirement.

What does OS mean in technology?

Is OS important for placements?

For placements where you need to build software products, operating systems definitely play a crucial role. They help in your deeper understanding of how things work under the hood and how you will be able to make your application work efficiently with the resources your user has.

What is an operating system tutorial?

What are the 10 types of operating system?

Operating systems is a subject that is extremely crucial for every engineer to understand. With the proper utilisation of CPU resources,  In addition to this, operating systems are a fundamental part of every technical interview.

While you can look up ‘OS basic interview questions on the internet, you need to follow a structured approach to learn operating systems and OS fundamentals.

A guided approach through this operating system tutorial will help you ace the interview in no time!

Here is the newly launched Operating Systems Guided Path by Coding Ninjas which will make you get one step closer to your dream job.