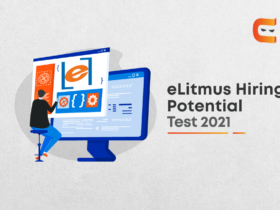 How to prepare for the eLitmus Hiring Potential Test (pH Test)?

Have you ever seen people posting that they received internships, swags from coding challenges, or contests? You want to try them too, but you don’t know where to start? Then you are on the right page; just think of all your questions about coding contest, and this blog will answer each of them by the end.

But first, let’s take an example of why we need to prove ourselves best. If you want to be the best cricket player, can you do that by just practising? No, you have to prove yourself, get the better of others, and conquer the battle because it is a precept that “More lessons are learnt on the sports field than in the classroom”.

Thus you need to take part in tournaments and upgrade yourself. Similarly, if you want to be the most exemplary coder, you have to face challenges and showcase your programming skills. The best way to do the same is Coding Competitions.

These contests offer young, talented students and programmers the opportunity to measure their capabilities and compare themselves to other programmers worldwide, motivating them to practice more. These competitions also provide you with swags, jobs, internship opportunities, scholarships, mentorships, etc.

What are coding competitions?

Coding competitions are primarily conducted in virtual environments so that people can participate from all over the world.

Coding teaches you how to think?

They teach you to think from different perspectives. In most coding competitions, you will have some problem statements; you need to solve them considering time, space complexity. You always need to optimise your code; optimising shows you are a good programmer.

Coding competitions include hackathons too. In hackathons, you need to build a project based on an organisations’ problem statements or themes. You need to design your whole idea with a prototype and present it to the judges; this develops your presentation skills, teamwork, and network. Hackathons are the best way to improve your productivity.

Let’s talk about top programming contests worldwide and the perks of participating in them.

We’ve put together the following list of some of the most popular coding websites that conduct coding contest where you can level up your skills for many roles, from popular data science to software development. Most of them are annual competitions, but a few are continuous so that anyone can participate at any time.

These competitions are public so that participants can use C, C++, Java, Python, C#, .NET, or any other programming language at per individuals convenience. Most companies hire through these contests; for example, if you win the Microsoft Imagine Cup, you can get the mentor sessions with Microsoft’s CEO (Chief Executive Officer).

Most companies use Hackerrank to hire interns like American Express. These platforms provide the opportunities to meet new people, share knowledge, and develop new skills.

ACM-ICPC is an acronym for “Association for Computing Machinery–International Collegiate Programming Contest.”

Gennady Korotkevich has been bagging first place in google code jam since 2014.

They held these competitions throughout the year to hire people looking for a technical career at Google and interested in solving fun, challenging problems. Furthermore, top participants may get a chance to get invited to interview at Google.

If you want to be the next top hacker, you can register here.

The winner of the Facebook Hacker cup 2020 is “Gennady Korotkevich”, with 76 points. If you love to take up challenges, check at their website.

Here are some tips for improving your rank in FACEBOOK HACKER CUP.

Earning these titles is what most programmers eternally daydreamed of.

Confused about How to Get Started With Codeforces? Read this blog.

Perks of Participating in Coding Contest

Participating in coding contest can build the enthusiasm to create new projects and helps you think differently. The hackathons develop your teamwork and make it easier when you join the corporate world.

The real-world impact of coding competitions shows kids and teenagers what computing can achieve beyond the classroom and helps them see the power of open collaboration.

That is just one of the many benefits Competitive Coding provides.

Let’s look at some of the perks:

Which platform is best for competitive programming?

There are many platforms to practice competitive programming. Some of the topmost platforms are CodeChef, HackerRank, Codeforces, LeetCode etc.

What are the best coding competitions?

Do you need a powerful computer for coding?

You don’t need a powerful computer at all. Programming is just editing text files, so if that is the only thing you do, get yourself a lower-spec option and save remarkable money.

What language do programmers use?

There is no specific language to use for coding. It is your choice, and you can choose C, C++, Java, Python, etc.

In this blog, we started with a discussion on what coding contest is and how participating in them can improve our programming skills and give us a surplus of opportunities. Then we discussed in detail some of the most popular coding websites that conduct competitive programming contests that sharpen your brain and increase your logical thinking.

Never Quit! It might look hard initially, but believe me, the adrenaline rush you will get when the idea of a problem clicks in mind after struggling for many hours is worth the effort. So push yourself to be one of the best programmers by participating in a coding contest.