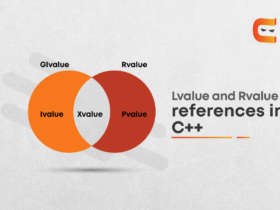 Lvalue and Rvalue references in C++

Numbers are everywhere- on price tags, bills, books, license plates, phones, even on our keyboards. And Have you ever wondered how computers understand and store these numbers? Yes, you are right, they store everything in them in zeroes and ones.

But, Humans are more innovative and know more than just zeroes and ones. Thus some great engineers invented programming languages. The primary purpose of programming is to communicate an algorithm to a machine (computer), i.e., to make a computer do something.

There are about 700 programming languages, and each has its syntax, rules, and regulations.

Ok! But there is one thing common; In most programming languages, all basic data types are built-in. In addition, many languages also provide a set of composite data types. Now! What are data types? A data type specifies the type of data that a variable can store, such as integer, floating, character, etc.

Today we are going to differentiate between float and double data types in C/C++. But before jumping directly into the differences, let us first talk about the fundamental concepts like what is float and double, the storage they require, their precisions, the conversion of a float variable to double, and vice-versa.

What is ‘float’ data type?

Decimal is referred to as floating-point because we can observe from above that decimal supports a variable number of digits before and after it, which means decimal point can float between the numbers. Thus the name float data type comes from the floating-point.

Now, we know the basic definition of a float data type. Let’s move on to read some more exciting facts about float.

The C++ program below shows the 6-digit precision of the float variable and truncating digits after that.

What is a ‘double’ data-type?

So what’s the difference between double and float?

The main difference between them is in its size and precision.

Some other interesting facts about double are as follows:

Conversion of a float variable to double

From the above code output, we can observe that it is impossible to create more precision than what we already have. Thus if you typecast a float variable to a double, the resulting double will still only have a precision of 6 digits.

Conversion of a double variable to float

Converting from double to float will give you the closest possible float because double occupies 8 bytes in memory and has a precision of 15 digits. In contrast, float occupies half the size and precision of double.

From the above codes, we can infer the following points:

What is a float vs. double?

1. Float is a single-precision data type.
2. Float has 6-digits of precision.
3. Float is a 32-bit floating-point data type.
4. The float variable requires 4-bytes of memory space.

1. Double is a double-precision data type.
2. Double has 15-digits of precision.
3. Double is a 64-bit floating-point data type.
4. The double variable needs 8-bytes of memory space. Just double as that of float.

Floating-point numbers are by default of type double. Therefore 99.9 is a double, not a float.

What is a double data type example?

Which is better: float or double?

Double is more precise than float and can store 64 bits; double the number of bits float can store. We prefer double over float if we need to do precision up to 15 or 16 decimal points; otherwise, we can stick to float in most applications, as double is more expensive.

What is a floating-point?

Decimal is referred to as floating-point because we know that decimal supports a variable number of digits before and after it, which means decimal point can float between the numbers.

Can a float be negative?

Yes, Floating-point numbers can be positive or negative.

Is double faster than float?

Yes, Operations on doubles are typically faster than floats, but double is costlier in terms of memory space.

This article briefly explains the concepts of float and double data types in C/C++.

We started with a formal definition of float followed by some interesting facts like why it has the name “float,” the storage it occupies, and its precision value. Then we moved on to double data-type and explained its storage, precision, how it’s different from float data-type.

We also discussed how typecasting from float to double and double to float is ideally allowed and valid but should be done carefully in the code because precision is lost if we convert double to float too often.

In the end, a table that discusses the differences between float and double is created for quick reference and recap.

Yeah! It is the end of the article but not of your learning. “Develop a passion for learning. If you do, you will never cease to grow.” If you ever feel the need for expert guidance to learn more concepts, Coding Ninjas will always be there; check out our DSA courses by starting your free trial today.

Also, you can try as many problems as possible on our platform CodeStudio created by aspiring and creative minds, which provides you hassle-free, adaptive, and excelling online courses, practice questions, blogs, mentors-support, interview experiences, and everything you need to become the perfect candidate for your dream company!