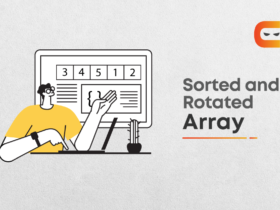 Given a Sorted and Rotated Array, find if there is a Pair with a Given Sum

Web Development is one of the most rewarding and fun fields of software development. A web developer is a master of both code and creativity. To become a successful web developer, you need to be good at both HTML and CSS.

When you are transitioning from HTML to CSS, it is important to understand what you will be expecting in the next step. This blog offers you a complete understanding of what the underlying difference is between HTML and CSS and helps you to kickstart your journey in the field of web development with an interesting comparison – HTML VS CSS.

HTML, or hypertext markup language is a language for the web which allows the user to create the basic skeleton of the webpage. It is the most fun and easy language to learn and experiment with. HTML5 is the latest version of HTML in which the standard of HTML has been redefined completely.

With HTML5, the possibility of creating a more comprehensive structure of your website has increased. Developers can now specify their content in a more elaborate and structured manner.

CSS or cascading style sheets are used to give style to the web page. Be it the colours you see on your web page, the font styles, alignment and positioning of different containers and even animations – CSS knows how to do it all.

To create a webpage or a web application, both HTML and CSS are vital. While one handles what elements will make the webpage, the other handles the aesthetics. HTML is used for specifying the content that will go on the webpage, link scripts and stylesheets and specify the meta content of the web page or web application.

CSS on the other hand is used to create font styles, the colour scheme of the webpage, animations and layout and positioning of elements on the page. It is CSS which is responsible for making your websites have a dynamic nature and be aesthetically pleasing across all devices.

HTML VS CSS Round 2 – The Syntax

HTML is based on angular tags where CSS creates blocks and uses declarations.

Let’s see an example code snippet for both HTML and CSS:

As we can see in the above code examples, the HTML code requires the content to be wrapped around in opening and closing angular brackets. “/” symbol is used to indicate the closing of the tags. There are some tags like <img>, <br> and <hr> (Image tag, break tag and horizontal rule tag respectively) which do not require closing tags.

Whereas in the CSS code snippet, we observe that the properties for a specific element are specified in a separate block. The block is defined by opening and closing curly braces. The elements inside the block specify the style for the element. The basic syntax for specifying a property for an element is “attribute:value” followed by a semi-colon to indicate the end of the property statement.

HTML VS CSS Round 3 – Types

HTML is one of its kind (literally). There is only one way to specify HTML and that is, in a file format which can be linked to other HTML pages. On the other hand, CSS is extremely flexible. It can be of three kinds – inline, internal and external.

Let’s look at code snippets for all three types of CSS:

The inline CSS is written within the tag of the element where styling is required. The syntax for the same is – style=”attribute:value”

The internal CSS is written within the head tag and further within the style tag. Blocks are created for different elements, classes and IDs within which style for that particular element is specified.

A link is added in the head section of the HTML file which specifies the location of the stylesheet and within the “style.css” file, CSS is written in the exact same way as it was written inside the style tag in the previous point about internal CSS. It is always advised and preferred to use external CSS for your projects.

Is CSS easier than HTML?

Both CSS and HTML are easy in fact. However, students take less time to learn HTML as compared to CSS since HTML has comparatively fewer concepts to understand than CSS.

Should I learn HTML or CSS first?

If you are starting with web development, it is advised to start with HTML first then move on to stylising your web pages with CSS.

Is HTML and CSS worth learning?

Indeed it is. Web development is a beautiful software development field. Once a student gets actually interested in the field, there is humongous scope and fun in the same.

Is Python harder than HTML?

After three rounds of rigorous comparison between the two pillars of web development, we observed that both the markup and styling languages have separate use cases. To offer your website a pleasant look and feel you have to become a master in both structuring your website properly with HTML and styling your website aesthetically with CSS. To learn both of them in-depth, you can refer to MDN documentation or devdocs.