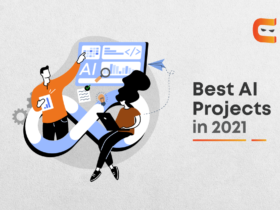 Data has risen to the mound as the new oil. The opportunity to derive information from the exceptional stream of data is now critical to business performance. This is where Data Science with Python enables businesses to make use of data and make informed choices.

But there is a fight going on in the minds of data scientists to find the right Data Science platform. Even though numerous resources provide the much-needed alternative, the competition is narrowing down to a common language – Python. Python is now the more common language for Data Science. So, let’s learn the basics of Data Science with Python.

Why should you learn Data Science with Python?

Python is the programming language of choice for many of the everyday activities that data scientists face. It is one of the most common Data Science tools used throughout industries.

Python makes the development process easy. There are numerous Django and Flask libraries and frameworks available to make your coding more productive and effective.

When comparing PHP and Python, you’ll notice that the same job can be accomplished in PHP in a matter of hours. However, with Python, it would just take a couple of minutes.

Python has a plethora of visualisation choices. Matplotlib serves as a stable base for other libraries such as Seaborn, pandas plotting, and ggplot. The visualisation packages aid in data interpretations and the development of charts, graphical and web-ready interactive plots.

Another significant advantage of using Python for Data Science is that it has links to a broad range of data collection and Data Science libraries. Pandas, NumPy, SciPy, StatsModels, and Scikit-Learn, are a few examples. These are only a few of the several open libraries, and Python can continue to add to this list.

Many data scientists who use Python discover that this versatile programming language meets a wide variety of needs by providing new ideas to previously intractable problems.

Python is a one-of-a-kind language that has seen rapid development and provides Data Scientists with many career options. If you study Python, you will look at a variety of other careers that you may like to do in the future:

So, then, this brings us to the question: What are the basics of Data Science with Python that should you know? Let’s look at them.

What are Basic Data Structures?

Basic Data Structures are a means of arranging and preserving data that is readily readable and modifiable. Lists, strings, and tuples are object sequences that are arranged. Lists and tuples are similar to arrays (in C++) in that they can include some kind of entity, while strings can only include characters. Lists are mutable containers for objects that can be reduced or expanded when desired.

Tuples, like strings, are permanent, which is a major distinction between them and lists. This assumes you may erase or reassign a whole tuple. However, you can’t alter a specific object or slice.

Those of you involved in Data Science should avoid automatically downloading Python, as it may easily become daunting. Since Python has thousands of modules, manually installing a PyData stack will take days if you don’t know what resources you’ll need to indulge in data analytics.

The Anaconda Python distribution, which will load most of what you’ll need, is the perfect way around this. Everything else can be built using a graphical user interface.

What is Data Science using Python?

Python is an open-source, compiled, high-level programming language that offers a fantastic introduction to object-oriented programming. It is one of the most common languages among data scientists for various Data Science with Python projects and applications. It offers excellent libraries for dealing with Data Science applications.

Is Python necessary for Data Science?

A python is a must-have tool for all data scientists, not just data analysts. You can render data more available and usable by making different charts and graphics and web-ready interactive plots. Python allows you to get a clear understanding of data.

How long does it take to learn Python to get a job?

The response to this question is dependent on your objectives. Only a few people know everything there is to know about Python. You learn to use Python in the context of the problems you’re attempting to solve.

If you’re starting from scratch and searching for full-time jobs in Python, you can plan on practising part-time for at least a few months. The length of time depends on the work you’re applying for. Example: If you are learning Python for a Data Analyst role, it will usually take at least three months for most people.

What level of Python is needed for Data Science?

Python fundamentals such as OOPS, data types, functions, multithreading, control statements and exception handling must be learned. Once you’ve mastered the basics, move on to learning how to use Numpy and pandas.

Learn how to develop machine learning and deep learning models using the sci-kit-learn library and frameworks such as Pytorch and Tensorflow. Then, familiarise yourself with data analysis libraries such as matplotlib, seaborn, and plot.ly.

How long would it take to master Python to work in Data Science?

Learning the fundamentals requires around 6-8 weeks on average. This gives you ample time to grasp most lines of Python code. Months and levels of research are needed if you want to be an expert in Python and its field and work in Data Science with Python.

What is the most effective method for learning Python for Data Science?

Is it possible to learn Python without learning C?

If you have a clear understanding of English with a bit of Mathematics, you can get started quickly. Usually, students start with statical languages like C, C++, Java or Pascal. Even if you have no programming experience, you can still learn Python as your first language.

What do I start learning in Data Science first?

Begin by learning Python or R programming (either work). Get fluent in mainstream Data Science with Python packages and workflows in your preferred language. Start with SQL query creation and get an understanding of statistical methods. Lastly, develop fundamental machine learning and simulation abilities.

Yes. For the most part, Data Scientists can code. Given if they have a data developer or a machine learning engineer on staff, they can get their help to bring their code into production. However, this does not take away the fact that you should focus more on your coding skills, even as a Data Scientist.

The data science world is increasingly evolving, and the amount of methods used to derive value from data science has increased. Data Science with Python is currently held in high regard by fans. With tech giants like Google demonstrating how to use Python and making the learning curve fast and simple.

It is on the path to becoming the most common language in the data science community. Do you wish to learn Data Science with Python?