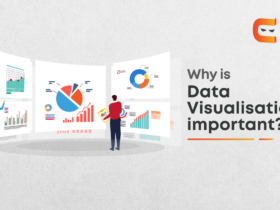 What is Data Visualization & Why It Is Important?

With the advent of automation and Artificial Intelligence (AI), we have gotten incredibly dependent on automated services and machine assistance. Machine Learning (ML) is one of the fundamental methods developers and data scientists use to power these machines, systems, and services.

ML also helps solve many business problems and mathematical challenges which can be time-consuming and ineffective if humans do it manually. ML allows machines to predict outcomes and figure out values that we are not aware of by accurately going through datasets, historical data and other variables.

With effective Machine Learning algorithms, ML can promote discovering realistic or accurate solutions to problems even when working with bad quality data or with changing values.

What is Machine Learning?

Machine Learning can be defined as the ability of machines to learn from data or respond (take action) to situations on their own. ML is one of the core components of AI and makes up a huge portion of the total research or work being done with AI.

ML automates various functions of the machines or services which lead to the automated functioning of the ML-powered systems. ML-powered systems operate on their own and also improve their effectiveness by learning with time. ML learning is also heavily used for business analytics, research, statistical problems and for various other fields which involve extracting more data from a given set of information.

What are Machine Learning Algorithms?

ML algorithms shape the framework and layout the foundations behind how the machine or system will function. Machine Learning algorithms power automated systems and many AI integrations. Algorithms expressed in mathematical forms will have an equivalent in most programming languages.

There are two main types of Machine Learning algorithms. Namely,

These algorithms help with practical ML problems and use both the variables, input variables, and output variables. These algorithms help systems learn to determine similar output as required from the dataset provided by comparing the results with an already given output and then effectively predict the output better each time through learning how to map the function better by taking reference from the given output. The machine is successful once it produces the same result on its own.

Why is Python Highly Used for Machine Learning?

Python is a high-level objective-oriented programming language that is quite to understand and use, hence adding to its popularity. It is highly preferred by data scientists and developers due to it improving code reusability and program modularity.

It is also highly versatile in nature and boasts of huge support for many functions, libraries and external toolkits. Python is one of the best programming languages to build smart systems or machines due to having various advantages which promote ML. Here are a few reasons why Python is highly suitable for machine learning.

What are the five popular algorithms of machine learning?

The five most preferred Machine Learning algorithms are Logistic Regression, Linear Regression, Naive Bayes, Decision Tree and Support Vector Machines. These five are the most popular ML algorithms globally and used extensively by developers and data scientists across the world to power many ML projects.

What are the five best algorithms in data science?

The five best algorithms in data science are also the most popular ones among the other algorithms. These include Logistic Regression, Linear Regression, Random Forest, Decision Tree and KNN.

How many machine learning algorithms are there?

How do I know which algorithm to use in machine learning?

This can only be determined by analysing the nature of the project. This depends on various factors such as the variables and values one will be working with, the values or information that needs to be found out or discovered and especially the complexity of the learning requirement.

The kind of algorithm one needs also heavily depends on the dataset or training data one has and the quality of it, which leads to a requirement of noise removal, further processing, pre-processing or mining of data.

Why is Python the best choice for machine learning?

Python is very versatile and adaptive, with massive support for expansion, boasting of extensive libraries and tools. Python is fast and easy to use as well, making it one of the best object-oriented programming languages of all. Python is best suited for machine learning due to its massive number of features, versatile support of functions and various other benefits while being dynamic in nature.

Which is the best machine learning algorithm used in Python?

Linear Regression can be declared as being the best ML algorithm in Python as it is extensively used for ML and preferred by many ML developers. This supervised ML algorithm is popular and acclaimed for predicting outcomes while observing features. It is capable of running on single variables or multiple variables. It is also relatively less complex and easier to apply; hence, it is preferred by a lot of beginners as well.

What are other languages used for machine learning?

Even though Python is the most suited for machine learning, a lot of developers prefer to use languages such as R, Java and Julia to power many machine learning projects. R is especially popular being highly statistically oriented being able to solve statistical problems very effectively.

What is the future of machine learning?

ML has an incredible future ahead with technology and AI getting better every day. ML has a very promising future with incredible innovations being achieved in several industries using ML as a foundation for solving challenges, tackling problems and powering automation.

What skills are required for machine learning?

One needs to be proficient in programming in order to be involved in machine learning, being able to code and execute algorithms through languages such as Python. Interested individuals should also have strong foundations in mathematics, advanced algebra and statistical concepts.

There are many Machine Learning algorithms that help developers and data scientists build machines and systems that are allowing organisations and companies to accomplish various IT, business and statistical goals. When choosing the right ML algorithm, one must consider the environment that he or she is working in and the immediate as well as the future requirement of the project.

ML projects can demand immediate results or solutions to problems, and many algorithms can take various approaches to the same problem. It also does not depend on languages as most of these will work across the common programming languages.

Level Up In Your Career With Our Premium Courses | Enrol Now.

Algorithms are fundamentally the same across all languages as they all originate from mathematics, so when choosing ML algorithms that can serve the same purpose, it completely depends on the user preference and language of choice.

However, when it is not about solving problems and machines need to be programmed into learning through data, user behaviour and real-time use, fundamentally functioning on its own, specific algorithms are best suited for these purposes.