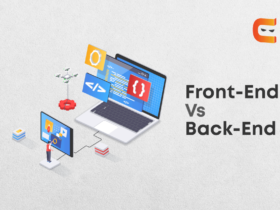 Front-End vs Back-End vs Full-Stack

Web application development requires a lot of thought, time and efforts. The developers have to take care of various aspects ranging from the look and feel of the website to the performance enhancements of the website.

JavaScript is the language for front-end web development and while one would love to write code in its entirety and do customisations as one prefers, it is definitely easier when you have a dedicated framework doing most of the heavy work for you.

Vue JS and React are two pioneers in the world of javascript frameworks. Both have been entrusted and chosen by hundreds and thousands of developers worldwide. A question that persists in the minds of all budding web developers is which framework do they actually have to go with? Which framework would bear the best results for their projects? Which framework has better scalability and flexibility?

Too many questions. Let’s look at the article below and try to understand what Vue JS and React frameworks exactly do. This will help you comprehend even better about picking the right framework for your next project.

What exactly are Vue JS and React?

React and Vue are Javascript frameworks that have been put into existence as a boon for front-end developers around the world. Both the frameworks are open source and have a huge developer community backing both Vue JS Vs React up.

ReactJS utilises the concept of a virtual document object model, which basically means that the actual document object model is copied inside React where every element is nothing but an object of our favourite language, javascript. Now you must be wondering, why do people prefer using React when they have plain old VanillaJs? React has a one-way data-binding feature that lets the developers taste speed and performance enhancements.

VueJs also works on similar lines and offers two-way binding in addition to also utilising the concept of a virtual document object model. But this is not what makes Vue a top choice for developers. Vue utilises the power of progressive design – which means that the applications developed with Vue are built step by step instead of building all at once. This lets the developers focus on small aspects of their application and offer a more robust application in the end.

Similarities between React Vs Vue JS

They’re both javascript frameworks. (Seriously?)
Okay, no, don’t stop reading, there are a lot of similarities between React and Vue:

Differences between Vue JS and React

Vue is Vue and React is React. (Promise this was the last one).

While Vue and React are similar at their core and purpose, they are inherently different in their execution methods which make them suitable for different use cases.

Let’s find out what the differences are:

2. Third-Party Libraries: You will be surprised to know that React was built to do only three things – DOM manipulation, component management and state management. So how does React do the rest? Since React is an open-source Javascript framework, a lot of its tools and features have been built by the developer community. Vue on the other hand has the best of both worlds.

Different tools and libraries are built by both the community and the core team. For beginners, Vue is more suitable since the developers will not have to worry about the integration and installation of third-party libraries and React is more suitable for senior front end developers. However, you are most welcome to challenge yourself.

Performance: Who will win? Vue JS Vs React?

Let’s have a look at what exactly gives one advantage over the other in terms of performance:

1. Architecture: React has a component-based architecture which means that it will render its existing state based on the interaction of the user and the application. One interaction causes all the dependent states to re-render. Vue on the other hand utilising its two-way data binding methodology and connects the application with the user in a way that offers flexibility.

2. Scalability: React was initially popularised due to its reusable component structure. For large scale applications, React can be an amazing choice since it is javascript at its core, developers can modify it as per their needs. Vue on the other hand is also extremely scalable but is preferred for small scale applications.

3. Documentation: Vue and React both have excellent documentation and are easy to comprehend. Developers of all expertise backgrounds can use both documents with ease. However, Vue’s documentation is appreciated far and wide.

4. Community Support: The reason why this point exists in the performance comparison section is that the support of the community can assist in making the applications bigger and better. React having Facebook’s support gains more attention and hence more developers contribute and get involved with React. Vue on the other hand was created by a former Google employee after working with Angular and couldn’t gather much attention in its initial stages but the community at the moment is growing day by day.

5. Number of users: According to GitHub statistics, Vue has 183k stars and 28.9k forks whereas React has  168k stars and 33.7 forks which indicates a close competition between the both. Famous websites such as GitLab, Adobe Portfolio, Behance, BMW etc. have been built with Vue and websites like Facebook, PayPal, Netflix, Instagram, Twitter, Whatsapp etc. have been built with React.

Is Vue JS better than React?

It is not suitable to compare Vue JS Vs React on an overall basis. To witness a full comparison, read the blog above.

Is Vue faster than React?

No, Vue and React have separate use cases and both will continue to grow.

No, VueJS is gaining popularity day by day with currently 183k stars on GitHub.

React and Vue is both two extremely different worlds with their ancestors being the same. Both are descendants of vanilla javascript and utilise its powers to the best abilities. React and Vue are suitable for different use cases and the comfortability of a developer might vary according to his knowledge, needs and code patterns.

React and Vue are both gaining steady popularity day by day and it will not be suitable to classify one better than the other. Just like you can’t pick better cutlery between a spoon or a fork, you cannot choose between React or Vue.

My suggestion? Look at both their documentations and see where they fit in your development process. Then decide.