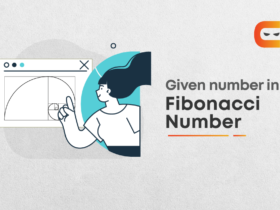 How To Check If A Given Number Is a Fibonacci Number Using Python?

An operating system is the heart and soul of a computer.

Choosing an appropriate Best Operating System for the programming ecosystem is perhaps one of the important decisions that one should take at the beginning of one’s career because one wants to always start their career with the things that work best for them.

But First, What Exactly is an Operating System?

An operating system is an interface between the computer user and the computer hardware which helps control the execution of all kinds of programs, both hardware and software applications, effectively managing the computer’s memory and processes simultaneously. It begins when the system is turned on and includes all the processes that enable you to access and control the system.

The most important functions that an operating system performs are:

Operating systems can be understood with the help of the following diagram:

Why do programmers need Operating Systems?

Most of the professionals in the computer science field, like software developers, software engineers, web developers, etc., start their careers as a programmer. There is no particular Best Operating System for programming that can be said as the perfect operating system since the choice of an O.S. depends on some factors like O.S. used in one’s career path or workplace or simply just one’s personal preference.

The two major types of programmings that programmers need operating systems for are:

The language a programmer uses doesn’t restrict him to use a particular operating system. This is because, in programming, the focus is essentially on writing code in a cross-platform IDE. Hence, if you are using an Operating System just for coding purposes, the choice really boils down to other factors rather than the necessity to use a particular O.S.

Programming for a particular operating system requires you to code dedicatedly on that O.S.  While technically it is possible to code for one O.S. on another O.S. with the help of Virtual Machines, doing so is not advisable since it is better if you get more acquainted to the O.S. you program for.

The three most popular O.S. options used by programmers are Windows or the UNIX-based macOS (formerly OS X) or Linux. Either of these O.S. can be used to perform almost all the functions you want, however, your goal should be to find the O.S. that will help you perform your tasks most efficiently.

Let us deep-dive into the pros and cons of each of the popular types of O.S. to understand which one suits our needs the best.

Being the most popular and widely-used O.S. in the market, Windows might be a tempting option for a lot of beginners.

Linux is presumed to be one of the most acclaimed operating systems for programmers since it is very lightweight and allows you to customize the O.S. according to your needs and likings.

macOS is also a UNIX-based O.S. with a variety of built-in or easily available development tools along with good tech support which makes it one of the best O.S. options for a programmer. Most organizations prefer to provide a macOS to its developers because of the ease of programming in macOS.

Many programmers prefer different O.S. for achieving different tasks. Hence, they prefer to get the best of all worlds by running a split partition with Windows and macOS along with an external Linux drive.

There are literally hundreds of operating systems in the market. Having personally used all the above-operating systems during various phases in my programming career, we would recommend choosing the Best Operating System for programming that you are most comfortable using and which provides all the capabilities that you would need to make use of.

If you don’t have any restriction on choosing a particular Best Operating System for programming, try your hand on different operating systems, going through most of the functionalities that each O.S. provides, and finally, choose the one which you think suits your current or future needs.

Which O.S. is best for programming?

The three most widely used operating systems for programming are Windows, Linux, and macOS. Though either of these can perform most of the tasks, you should look into the pros and cons of each O.S, to understand which would be the best O.S. that would suit your needs.

Linux is widely used for programming since it provides a lot of freedom to the programmers to customize the O.S. according to the needs of the programmer.

Depending on your preference and target O.S. for your application, Windows might be better in certain use-cases, while macOS in the rest. Though most of programmers prefer to use macOS for programming because of the speed, reliability, and multitasking capabilities.

Ubuntu is probably the most popular Linux distro for programming because it has one of the most intuitive UIs amongst all other Linux distros without taking a hit on the capabilities that a Linux environment provides.