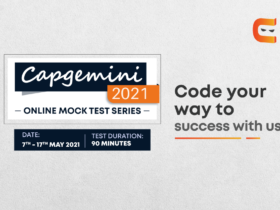 How to prepare for Capgemini Off Campus Drive 2021?

The world wide web is growing wider as you are reading this article. A couple of years ago, Elixir emerged as the newest addition to the modern web technologies which aimed at solving the problem of concurrency. While there exist languages like Java, Ruby, etc. which have been on the scene for a long time now.

It is still gaining huge popularity and a lot of developers are putting it to good use. It offers excellent scalability, excellent reliability and offers the developers a chance to write clean code.

Although it has gained popularity in the world of professional developers, students are still aloof to the benefits of this technology and are not entirely aware of the possibilities it has to offer and the additions it can do to your piece of software.

In the 1980s, to solve the problem of phone switching with more and more subscribers coming in, Ericsson developed Erlang which solved the problem to a great extent. Erlang consisted of tools that offered scalability, reliability and concurrency. To solve a similar problem between the connections presented on the web, Jose Valim created Elixir.

It is inherently similar to Ruby and offers features and functionalities which are already available with Ruby and hence developers argue why they should turn to Elixir. Learn it and incorporate it in their software when they are already well versed with Ruby.

The answers to those questions lie in the further parts of this article.

Another example in terms of mobile application is when hundreds of users are trying to access Billie Eilish’s Instagram page at once. It tries to solve the problem of application concurrency with a large number of users.

Phoenix: The Framework of all Frameworks

Like Rails is to Ruby, Django is to Python, Phoenix is to it. Phoenix is considered to be one of the top web frameworks. Phoenix offers easy use in addition to the best speed and optimized performance.

Phoenix has the power to connect two million WebSocket connections on a single box! And if you wish to put this power to use in your application, you need Elixir.

It is a functional programming language that is built on top of BEAM (Erlang’s virtual machine) which solves the problem of concurrency.

Is Elixir better than Erlang?

Yes, while Elixir and Erlang offer the same features of concurrency and improvement in fault tolerance, they can do it without compromising on the performance which is ultimately better for the developer’s application.

How is Elixir so fast?

Which companies use Elixir?

There are several companies which utilise the services of Elixir and Erlang namely – WhatsApp, IBM, Goldman Sachs, Lonely Planet etc.

Should I learn Erlang before Elixir?

No, there is no need to learn Erlang before Elixir. You can start with Elixir directly without any Erlang prerequisites.

Is Elixir easy to learn?

Yes! Elixir’s syntax is indeed very easy to comprehend and work with.

Elixir is perfect for applications which require communication between a large number of machines and users. Your code will most definitely not break, your application will be robust, fast and effective. What else do you really need?