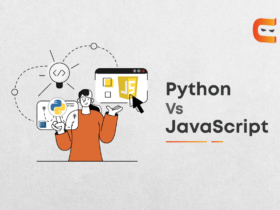 Angular is a single platform framework for mobile, desktop, and web applications. With angular, you can build applications easily with the help of declarative templates.

Before learning about Angular Alternatives, let’s learn the basics of web development.

It is a JavaScript framework for building applications in JavaScript, HTML, and TypeScript.

The code is written in TypeScript, which is then compiled to JavaScript while rendering on the browser.

But why are we looking for its alternatives then?

It has some disadvantages also, which can affect our application, and degrade the user experience.

Let’s see some disadvantages before moving to alternatives –

Angular when came back in 2009 was known as AngularJS. It was developed by the team at Google.

It was essentially loved by the developers and saw huge adaption.

But the issues with the framework made the team completely revamp it as Angular. Angular was completely different from  AngularJS.

It was in Typescript whereas the earlier one was in Javascript, which was not relatable for the developers’ community.

It created a kind of chaos and the developer started switching to different frameworks. Angular could not gain that momentum again. Over the period more efficient and quick web development frameworks evolved.

Because of these reasons, we should know its alternatives which solve these problems.

In this article, we will check out its alternatives:

Vue.js is a less opinionated JavaScript framework, which is open-source now. It is much simpler and flexible as compared to Angular.

It comes with features like CSS transitions, custom filters, and Reactive interfaces. Vue.js mainly focuses on the frontend.

It was released by Evan You in February 2014 who worked in Google on Angular projects. He took some format of Angular and made a lightweight JavaScript framework Vue.js.

Some of the prominent features of Vue.js are its components, templates, reactivity, routing, transitions, and of course its audience.

The popularity of Vue.js is increasing every day in the number of its developers. One of the reasons being it is easy to integrate with other third-party libraries.

It currently has 178k stars and 27.7k fork on GitHub. Big Companies using Vue.js are Facebook, Netflix, Adobe, Xiaomi, and more. It’s among the top chosen frameworks by big companies.

You can learn Vue.js for free on your course page.

Today, React is one of the most popular JavaScript libraries and the count of React developers is increasing every day.

It was ranked 1st in StackOverFlow developer’s survey in 2019 in the category of the most wanted framework and it is mainly used for creating single-page applications.

React.js is best when it comes to rendering complex user interfaces. Also it also comes with features like virtual DOM.

Virtual DOM can be rendered at client-side or server-side.

When the data manipulation is complex, then client-side DOM plays the role. One of the big advantages of React.js is its reactive components of React can be reused.

In a recent development, what you could do with class components can now be done with functional components and hooks.

React is flexible, and declarative for building web user interfaces.

It works on MVC pattern and plays as V in it. It is an open-source, component-based frontend library.

React was introduced by Jordan Walke, a Software Engineer at Facebook, on 29 May 2013. It is maintained by Facebook and the community of developers and companies.

React currently has 162k stars and 32.2k fork on GitHub. Some of the big companies using React are Facebook, Netflix, Twitter, Instagram, WhatsApp, Dropbox, and more. React vs Angular is always a hot topic in the developers’ community.

You can refer to our course page to learn advance programming.

Backbone.js is a lightweight open-source JavaScript framework released in 2010 by Jeremy Ashkenas. Backbone is simple and easy to learn.

One can start building the applications using backbone in no time and even can build a framework with backbone. It is a tool in the JavaScript MVC framework. Backbone.js is simple, flexible, and faster.

Some of the companies using backbone are Pinterest, Walmart, Delicious, and many more in the list. You can judge the popularity of backbone from this.

Aurelia is a new javaScript framework introduced by Rob Eisenberg and the team in January 2015.

It is an open-source framework managed by Durandal Inc., a company that creates libraries, and frameworks for the next level web development.

It is managed by a professional developers community and also comes with several independent small libraries and features like two-way data binding, Testing, Forward-thinking, etc. It is a highly modularized framework.

It doesn’t have any dependencies except polyfills.

The notable features of Aurelia are reactive binding, routing, composition, and progressive enhancement.

Aurelia works on the modern approach. It is good for application development, especially for people who want to work with the latest JavaScript framework.

It currently has 11.5k stars and 685 stars on GitHub. Aurelia is used by Companies like Chegg, dev, Contingent, Technologies, etc.

Meteor.js is the full-stack platform for building web and mobile applications completely in JavaScript.

It is a magical framework and helps to develop applications at light speed.

The best part about Meteor.js is it comes with all the features one needs for frontend development, backend development, and database management with addition to business logic.

It was released in 2012 as an open-source JavaScript framework.

The community of Meteor.js is growing ever since its first release. If you want to learn this powerful framework there are plenty of resources freely available on websites and youtube.

The biggest advantage of Meteor.js is it is pure JavaScript, you don’t have to learn any other extra framework.

You even not need to worry about server-side packages, which run on node.js because you need only Meteor.js packages to access the database.

KnockOut is also an open-source JavaScript framework released in 2010 by Steve Sanderson.

Initially it was famous but its growth is declining because of its lagging features and no improvements are done to this framework and losing its identity in the world of JavaScript frameworks.

It has around 10k stars and 2k forks on Github.

Some of its features are an easy association of DOM elements with model data using readable syntax. It works in real-time, any changes in the backend are automatically reflected in the UI quickly.

Mithril is a client-side JavaScript framework which is also open source.

It is faster as compared to other Angular alternatives and is used to build single-page applications. One can develop the web as well as mobile applications using Mithril.

If you want to work with pure JavaScript, Mithril is good to go with. With this extraordinary framework, the tasks are performed in an efficient manner.

Mithril is pragmatic, all the work is done in an efficient manner and uses virtual DOM, lifecycle methods, key-based reconciliation, and organises views via components.

Mithril has built-in modules like routing, XHR, etc. It is about five times faster as compared to other frameworks like React. It has less and optimized code which results in higher performance.

Its documentation is well detailed, easy to understand and relate to real-world applications.

Mithril currently has 12.5k stars and 935 forks on GitHub. Mithril is used by companies like Vimeo, Nike, Liches and more.

Polymers were developed by Google; it is a JavaScript library.

It was released in May 2015. It is built over the concepts of web components. Polymer comes with features like custom HTML elements, Polymer CLI, cross-browser compatibility. Polymer.js supports both one-way and two-way data binding.

It provides a command-line interface to manage projects from simple to complex level and uses Google material design to build complex mobile applications and uses the concept of reusable components.

Polymer currently has 21.5k stars and 2k forks on GitHub. Some of the companies are using Polymer are Google Earth, YouTube, Netflix, and more. With this, you can see its popularity and usage in big companies.

With Ember, you can create single-page applications with best practices. It follows the MVVM pattern, that means Model-View-ViewModel.

Ember comes with features like Ember templates, Ember CLI and for debugging Ember Inspector tools.  With Ember, you can build desktop and mobile applications like Apple Music.

It currently has 21.7k stars and 4.2k forks on GitHub. Companies using Ember are LinkedIn, Nordstrom, and many more.

Monkberry is a simple JavaScript library, for building web interfaces. It is a small library of just 1kb and fast in creating web-based user applications.

It is easy to learn with full testing, curved templates, and updated DOM and comes with a powerful testing engine, compiled into JavaScript. It is an open-source tool.

Choosing the framework for development is a difficult task, all the libraries have their own pros and cons.

As we saw in this article, libraries are JavaScript libraries, built on the top of JavaScript. So, the important thing is the core which comes from JavaScript.

Focus on deep concepts of JavaScript, and then you can go for any framework.

Learning the core concepts will make you easily adapt to any of the frameworks since the core is the same for all.

I hope you found this article useful, do comment if any feedback. We are always here to help you out.