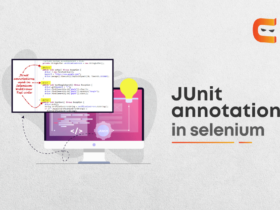 JUnit annotations in Selenium: All you need to know

Each element in the linked list is known as a node.

A node consists of two parts INFO and POINTER. The work of the INFO part is to store data, whereas the POINTER stores Address of the next node and its work is to point to the next element.

A linked list is a linear collection of data elements, called nodes pointing to the next nodes by means of pointers. Have you ever thought about why we call it a linked list? The answer is simple because it stores
data in sequence i.e in linked allocation, where the address of the next node is stored in the
previous pointer.

Let us understand the LL more clearly with the help of a story. In a class there were 40 students, their class teacher wanted to take them to watch a movie. She booked 40 tickets by calling the manager of the cinema hall. The manager booked one entire row having 40 seats in it. The teacher took their students in the hall and the movie started but because of some urgent work, the class teacher had to leave the hall, so she noted down the seat number and row number of the first student so that she can easily find her students.

After the two-hour movie gets over and the class teacher comes and goes that noted seat number and counts 40 students from there and takes them with herself. Again a year later they make a plan to watch a movie this time an entire row is not empty so they got seats scattered in the hall, this time also teacher has some work but this time there is a challenge in front of the teacher to note the seat number and row number of every student so that she can find them easily.

The conclusion of the story is when the students were seated in a row it was similar to an array. In the array, all the elements are stored in the contiguous location. When the students were seated here and there having a slip containing the sitting number of the next student it was similar to the linked list. In the linked list each element stores the address of the next element.

When we are not sure about the size beforehand, we need a data structure that stores the memory at runtime, the linked list does so. So we use a linked list when exact numbers of elements are not known to us.

There are many operations which can be performed in linked lists like Insertion, Deletion, Traversal among them let us talk about Deletion.

The function for the deletion of the node is DeleteNodeBeg(). Let’s go through its code.

Let us understand the code, in our code DeleteNodeBeg() is the function which we had created to delete the first node. In this start is the pointer which is checking whether the list contains any element or it is empty. As it found that any element is stored in the list, it goes to the else part of the program.

Deleting a node from the end of the list

Algorithm:
1. If the first node is null or there is only one node, then return null.
2. Find Second last node.

To explore more articles about Data Structures, check out our blog’s section.