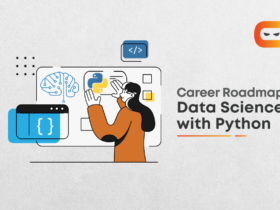 How Data Science with Python Can Kick-start Your Career?

AI-based filtering, face changing and photo editing software has taken the internet by storm. People today spend endless hours trying to find the perfect filters to beautify their photos, try quirky animal or rockstar filters or just trying to anticipate how their future self would look like.

With the advancements in virtual reality and augmented reality, developers are trying to constantly inject more life to their models. This desire to generate realistic AI faces has been made easy by the development of Generative Adversarial Networks (GANs for short) in 2014 by Ian J. Goodfellow and his co-authors. In this blog, we will learn how to utilise GANs and PyTorch to create anime faces.

What are Generative Adversarial Networks (GANs)?

As defined by Machine Learning Mastery, ‘Generative modelling is an unsupervised learning task in machine learning that involves automatically discovering and learning the regularities or patterns in input data in such a way that the model can be used to generate or output new examples that plausibly could have been drawn from the original dataset.’

This can be described with the help of the following diagram:

Mostly used in the field of image transformation, GANs generate novel content with the help of two sub-models, Generator and Discriminator. The generator model takes in a random input vector and generates a new fake content, while the discriminator model tries to classify the examples as real (present in the training data) or fake (developed by the generator model).

PyTorch is a free and open-source machine learning library developed by Facebook’s AI Research Lab (FAIR) under the Modified BSD License. It is widely used for computer vision and natural language processing since it is an optimised tensor library used for complex deep learning solutions by utilising GPUs and CPUs. We generally use PyTorch for generating AI faces because it provides two high-level features – Tensor computing and deep neural networks.

Similar to NumPy arrays, the tensors help store and operate a tensor class on a homogeneous multidimensional rectangular array of numbers, while the deep neural networks are built on a tape-based automatic differentiation system. Hence, PyTorch perfectly suits our requirements to create the novel anime faces.

The detailed code for generating Anime faces can be found at https://www.kaggle.com/kmldas/gan-in-pytorch-deep-fake-anime-faces. Here, I will briefly explain the various steps and functions involved in the process.

We can find around 63.5k cropped high quality anime faces dataset in JPG format at https://www.kaggle.com/splcher/animefacedataset. Before training the GAN, we load this dataset using ImageFolder class from torchvision and resize and crop the images to a standard size of 64 x 64 px. Then we normalise the pixel values with mean and standard deviation of 0.5 each to ensure the pixel values are in the range (-1, 1), which is desirable to train the discriminator.

We use the ReLU activation inside the generator and TanH activation function on the output layer of the generator since abounded activation (TanH) allows the model to learn quickly and saturate and cover the entire colour space of the training distribution.

The discriminator is essentially a binary classification model which distinguishes images into real and fake images, with the hero of a binary cross-entropy loss function. We also use a convolutional neural network (CNN) to output a single number for every image and a leaky ReLU activation which supports higher resolution modelling well since it lows small gradient signals of negative values to pass through. The output is a single number ranging from 0 to 1 which tells the probability of the real input image being picked.

The generated images after 1st, 5th, 10th, 20th and 25th epochs of training are given below. As we can see, with an increase in epochs, the new anime faces become more real and clearer.

To conclude, we can use General Adversarial Networks to create very believable anime faces. The different domains in which we can utilise this technology are endless. We can create more realistic video games with better graphics and better virtual reality and augmented reality systems. We can also improve the quality of filters and utilise this technique to transform images.

We hope you liked this article, explore our courses on the website now. 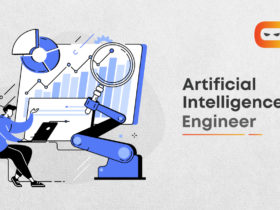