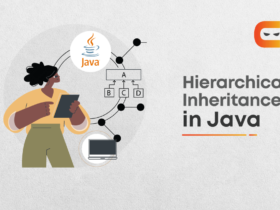 Linked List is a data structure which is of linear type. This article will help you learn how to solve it in Java.

We must have seen arrays which are also a linear data structure, then why do we need the it or let’s say any other data structure? Arrays have some limitations which restrict the use of an array in some places. Major disadvantages include:

It offers some amazing features and thus it is of great use, some of the advantages of it include:

Elements in it are not stored in a contiguous manner but we have pointers to store and point the data elements. We have two elements basically that create a node in it.

Creating a node in Java:

Singly Linked List (SLL):
As discussed there is a node which points to the next node with the help of pointers. Head points to the very first node of the data elements as shown below.

As we have already created a program using three elements. Now the following function will print the elements:

Doubly Linked List (DLL):
It is similar to SLL, but we have one extra pointer in it. It contains one-pointer with the name prev along with the next pointer.
It contains the following:

The very first node will be pointed by a head and the last node by the tail as shown. Prev of the first pointer will be pointing to null only.

DLL has some advantage on SLL which includes:

Insertion in a linked list can be done in different ways:

Insertion at the front:

Insertion can be done from the front using the following function:

Deletion In Linked List:
Deletion in the linked list can be useful in java as discussed. Let’s see how the deletion is done in a linked list in Java.

There are some inbuilt operation that Linked List provides, some of them includes:

Conclusion:
So, the linked list in Java is a very important linear data structure that takes away the worry of the size of the data elements and also provides the operations like insertion and deletion with an economical cost. Also, the variety of linked lists ease the problem to a great level as we have double and circular doubly linked lists as well which are quite useful in real-world applications.

Want to read more such articles? Why don’t you check out the Difference between Array, Queue & Stack.