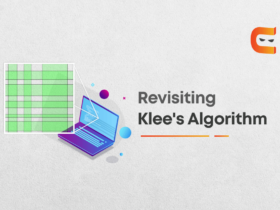 Klee’s Algorithm: Length Of Union Of Segments of a line

As you know, any IDE or source code can become an unparalleled ally when it comes to code compilation or visual assistance for debugging our application.

IDEs are based on your operating systems and the product you want to develop with the programming language. You need to choose the right IDE for your usage. To help you with this, here are some of the best IDEs for C++. Let’s skate the list to find the IDE that suits your needs.

1. Eclipse CDT – Most used IDE for every language.

This is one of the most popular IDEs. It also has an IDEs project tab, where you can have multiple projects. This is the main reason why the Eclipse user interface is loved in the developers’ community.

The code of different programs can be seen from the same window without changing the perspective of IDE. To debug your code, it also provides a debugging view. Sounds interesting, right?

CDT wants to support exclusive features that include an overall view of the entire code as it needs to know the places of functions being called inside the code. Eclipse CDT is preferable for an amateur programmer as it has a lot of plugins.

You would’ve heard about Dev C++ more if you were a computer science student, who has worked on C++. It is an open-source IDE and the primary key for an IDE is to support multiple languages. This IDE satisfies the key feature. Similar to other IDEs, Dev C++ also offers tools to edit, debug your code and compile. You can switch between platforms for header files.

Dev+ features some prominent facilities comprise of the followin

You can even add-on libraries with the package manager feature. Those are some extraordinary pros in Dev C++, to counterbalance that, the chief drawback is, it can only be used on Windows OS as other operating systems don’t support it.

Code lite is an open-source and free IDE that specialises in C, C++, PHP, and JavaScript. It is used by backend developers who use Node.js and other paramount operating systems like Mac OS X, Linux, Windows.

It also permits you to redo/undo operations, carry out basic editing actions, shift, remove, or convert lines, change to a full-screen mode, hide or uncover the whitespace, finally supporting functions for finding and replacing words.

You can also create bookmarks, execute fast debugging actions, and configure the source code editor settings by allowing the tool to display line numbers. In addition to this, you can also leverage its integrated auto-complete function. While saving the files, the software can maintain the vacant lines. Customising the bookmarks, allocating hotkeys, selecting background font and colours are extra features.

I know you are all expecting something different in Code blocks as it is a famous IDE. What difference could this IDE have from the rest of the bunch? It is the same as other IDEs in terms of cross-platform and free source coding.

Code:: Blocks are even special as they are designed to be very flexible. Unlike the others, the plugin framework is used to build Code:: Blocks to compile and debug the code. Coding a plugin can aid in adding any form of functionality. If you’re a beginner, Code:: Blocks are an absolute start.

If you are interested in a standard IDE to work with, Visual Studio might be the one for you. It is developed by Microsoft and that’s why it gets the name ‘standard IDE’. It works well with all platforms including web cloud, Android and Windows.

If working with different languages sounds like something you do often, then definitely go for this IDE as it is suitable for many popular programming languages. When you are working with a team, you would probably need a Pro version. This might turn out to be a drawback as it is not free.

But, if you are working alone, you can even use the express edition which is absolutely free. You can also make use of certain features that help to refactor, analyse, and repair code problems.

This is also a cross-platform windowing API. Similar to all the common coding IDEs provide, QT also gives you certain common things including dialogues, buttons, and all other logic user interfaces behind that. Now, it even provides data structures.

It also has plugins for other IDEs out there but if you are looking for a cross-platform C++ IDE, it is definitely recommended that you check out QT creator. The only demerit of QT is, it is ginormous and the installation is 20-30 gigs by default.

7. Clion by Jetbrains – Paid but most loved for the interface

This is one IDE suggested by most of the C++ programmers as it is a cross-platform IDE and is powerful to work with.

Clion is a bit quicker in processing than other IDEs. The variable values while debugging are shown right next to them whereas in Eclipse there is a separate window for this. Clion reads your entire code and takes care of the routine, allowing you to focus on other important things.

Clion is a commercial platform that costs a little bit but if you are a person who works with different programming languages, you could invest in this platform and get consistent with the environment.

It is appreciated by many developers for its modular design, which means it can be extended by other developers(third-party) who can create plugins for Netbeans to enhance its functionality.

Netbeans is actually a Java IDE and it is celebrated as one of the best IDE among all. Although it is a Java IDE, it works extremely well when you add C++ functionality. It is fairly lightweight and performant and is available in various operating systems like Windows, Solaris, and Linux OS.

It is one of the highly configurable text editors which is free for personal and commercial development. Github developed Atom IDE. It is portable for use on Windows, Linux and Mac OS with a very simple user interface to work on.

It is featured with smart auto code completion and Git integration features. It allows you to compare and edit codes across files with multiple panes.

Atom is a modern and customisable IDE that supports C++ language. Additionally, the package manager includes a lot of plugins. You can even open a single file or a whole project in a window. The file system browser feature is precisely done for this.

Here’s a treat for all the Mac users as Emacs is an exclusive IDE for Mac OS. All the nine IDEs listed are for Windows as well as Mac Operating System. If you are a Mac OS user, Emacs is one of the best C++ IDE. It has enormous customisable properties and the key feature is that it supports syntax colouring.

To develop copious extensions, a packaging system is also provided. Emacs Lisp code is used for customisations. Built-in documentation is issued with the IDE. Did I tell you that it works well on GNU and Windows too?

Tell me now, what are you searching for in the conclusion? Every IDE listed above is some or the other way connected to your interest in the coding environment. Stop searching for other IDEs now and pick your favourite one among these. Work and get comfortable with your work environment. We’re sure you would love to work with these C++ IDEs.