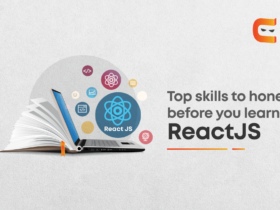 Top 5 skills to learn before you start with ReactJs

This blog explores the history of AngularJS and Angular to help you understand the fundamental differences between both of them and help you decide which one to choose for your next web development project.

AngularJS is a prominent front-end web framework developed by Google, which was initially released on October 20, 2010. It is based on JavaScript and is popular for simplifying the development of interactive single-page web applications. The template of AngularJS is written in HTML and it is commonly used in the MEAN stack which consists of Mongo DB (as the database), ExpressJS (as the web application server framework), AngularJS itself (as the front-end) and NodeJS (as the server runtime environment).

Later in the year 2014, the same team that built AngularJS at Google started working on Angular 2 which is written in Typescript instead of JavaScript. It was a major upgrade to AngularJS, starting from version 2.0. TypeScript is a superset language of JavaScript with useful additional functionalities, created by Microsoft to
solve the challenges faced by JavaScript.

The term “Angular” encompasses Angular 2 and the subsequent versions of Angular. Angular 2.0 was released on 14th September 2016 and it was drastically different in comparison to AngularJS or the 1.x versions due to significant changes that were introduced to the framework. Since then, the different versions released for Angular include Angular 2, Angular 4 (3 was skipped to avoid confusion with router version),
Angular 5, Angular 6, Angular 7, Angular 8, Angular 9, and Angular 10 (on 24th June 2020). You must keep in mind that these are all the updated versions of the same framework called Angular.

The last version of AngularJS, 1.8 is a long term supported until 31 Dec 2021. It would no longer be updated or developed further. Both Angular and AngularJS are MIT licensed and open source frameworks.

What are the differences between AngularJS and Angular?

As discussed earlier, AngularJS was written in JavaScript, whereas Angular has been written using TypeScript language maintained by Microsoft which is backwards compatible with JS and has brought features like static typing and annotations. The project architecture is distinct in both of them. While the architecture of AngularJS is in the traditional MVC pattern (Model View Controller), Angular utilises directives and components as its primary architecture and does not involve the concept of controllers and scope.

Components help the coder in writing reusable and neater code, which saves time and speeds up the development process. So Angular is a web component friendly as compared to Angular JS. The template structure of AngularJS has been rewritten in Angular with the introduction of new features with each
a component having a template attached to it.

When Angular JS was introduced, it was not designed to focus on mobile browsers and did not have in-built support for mobile applications, due to which it is not mobile-friendly. On the other hand, Angular was built such that it could support the development of native mobile, native desktop, web and mobile web. So, it is used for both mobile and desktop apps (similar to react native) and it is supported by all the popular mobile browsers like Safari and Opera Mini.

One major difference in the code is in the expression syntaxes used. Directives like ng-model are used for two way binding and ng-bind is used for one way binding in AngularJS. To bind the data between view and model in Angular, we use ‘[ ]’ for property binding and ‘()’ to bind an event. Another difference is present in the routing configuration. $routeprovider.when() is employed in AngularJS, whereas in Angular, routes array is used to define routing configuration. Also, Angular utilises hierarchical DI (Dependency injection) with a unidirectional tree-based change detection which aids the performance and enhances efficiency. It is not used in AngularJS.

Angular provides better speed and performance due to its superior modularity and structure as compared to AngularJS. Since the core functionalities are better modularised in Angular, it is more favourable in terms of management and ease to create larger applications with source code of increasing size. This has also paved
way to a lighter core, asynchronous template compilations, improved testability (unit tests) and dynamic loading. In AngularJS, rendering of the HTML at the server-side was required for creating search engine optimised apps. It is not needed in Angular.

Angular also comes with package Angular CLI (command-line interface) using which we can initialise, scaffold and manage application directly. It supports Angular Universal for SSR (server-side rendering). It has better tooling support available (which include CLI, IDEs, debuggers, code validators, etc.) as compared to AngularJS which did not have an official CLI.

While contemplating on which web framework to go for amongst Angular and AngularJS for your next web development project, you must consider different aspects like which web browsers are to be supported, the complexity of the application, its size, its compatibility with the technologies you will be working with, whether you want it to be mobile focussed site and various libraries that are to be used in the project. Angular, being modern in terms of its functionalities and better compatibility, it is deemed to become more and more widely used in the future. It is well suited for most types of web applications.

Many people are still opting for AngularJS for simple small scale web apps, but it is recommended to upgrade to Angular soon as the newer features may become incompatible with the older version in the future. You can learn Angular and use it to create web apps and add them to your list of skills and grow as a web developer. As we have seen above, Angular 2+ is a complete rewrite of AngularJS, so if you are a beginner and you do not know AngularJS, you need not worry about it and you can easily start learning and grasp Angular 2+ or Angular.