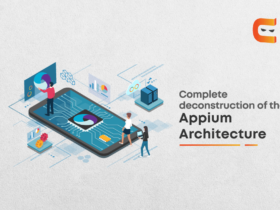 Deconstruction of the Appium Architecture

Android plays a vital role in the home automation industry, as more than ninety per cent of automated homes are controlled by using an Android-based user-interface.

The back-end structure of these devices is based on the contemporary robust network protocols such as Z-Wave and ZigBee that allows connecting as high as 65,000 smart devices in a mesh network and can communicate with each other wirelessly; this implies that there is no ripping and drilling for laying down wires.

Bluetooth and Wi-Fi have been decades old now and still continue to make our life easier. Bluetooth sharing, Bluetooth speakers, Bluetooth headphones are till date considered to popular tech-goodies. Although they are very useful yet they had some restrictions such as the range was limited to a few metres, it could not penetrate walls and floorings, and hence, it couldn’t be employed for creating security systems. But as advent goes, the evolution of network protocols became steeper and now we have the Z-Wave 700 series also. We have discussed in detail the network strategies and the role of Android in home automation below.

Wondering, how smart devices communicate with each other?

Smart devices rely on wireless protocols for accomplishing dialogue flow in their system. Android Studio offers a chain of default classes or abstract classes so that we can include this network classes in our Java or Kotlin code. Let’s go through some wireless networking protocols that allow smart devices to communicate with each other:

Bluetooth: With the ingress of Bluetooth Low Energy in 2006, this wireless protocol became more energy efficient. It is widely used in almost all mobile devices and sparsely used in smart home technology, because of its limited range. The Bluetooth devices get connected very quickly; it is used in fitness trackers, headphones, speakers, mobile phone, etc. Alas! The range of Bluetooth is short and nearby devices can produce interference in the connection as they operate at the busy 2.4 GHz frequency.

Wi-Fi: Just like the Bluetooth, Wi-Fi is considered to be the most power-consuming and least secure, yet ubiquitous home automation protocol. Analogous to the Bluetooth, they also operate on the traditional 2.4 GHz frequency to fabricate affordable networks. Though, there are abundant security features that keep the network safe; still, the system is vulnerable. The security feature needs to be updated regularly; else, the system may crash. Wi-Fi also has restricted coverage, as supplementary devices can’t retranslate the signal received from a Wi-Fi router. Due to these shortcomings, there was a dire need for an ingenious protocol.

Thread: In 2015, the Thread group developed this contemporary IP V6-based protocol. It is owned and managed by the thread group. It has the superpower of working even when the Wi-Fi network goes down, even though it consumes less power. Currently, only a few devices are Thread devices as the protocol is young; however, this protocol is gaining momentum in the market as more manufacturers are being included in the Thread Group.

ZigBee: It came into existence in the year 2016, as the evolution of the Internet of Things was progressing steeply. ZigBee is wireless communication technology most suitable for short-range of communication channels. Following the successful release of the ZigBee alliance, more and more manufactures were inclined towards the global wireless language for smart devices. ZigBee is considered to more reliable, affordable and efficient than the other WPAN’s, such as Wi-Fi and Bluetooth.

There is a distinct slot designed to synchronise an app so that the users can manage and control the network sensors by a single tap on the app. Being an open standard protocol, ZigBee is frequently updated and easily customisable. This makes ZigBee, the most widely used applications for the internet of things. ZigBee is a wireless mesh network directed towards battery-enabled devices that consumes low power. The ZigBee based Applications combine wireless light switches, home energy monitors, security systems, cameras, traffic management systems and so on.

Z-Wave: It is the latest wireless communication protocol for home automation devices. From its ingress, till today Z-Wave has been upgraded multiple times can we have the Z-Wave Plus, Z-Wave SmartStart, Z-Wave Plus V2 series also, the most intrinsic feature is that all of these versions are backwards compatible, that is all the new versions are compatible with the earlier versions.

In contrast to ZigBee that operates at the 2.4GHz wireless frequency band, Z-Wave operates at in 900 MHz frequency bands, which has comparatively lesser interferences. Due to this low-frequency range and a longer wavelength, Z-Wave can easily penetrate obstacles such as walls, doors, floors. Therefore, a Z-Wave network can be created without ripping off the carpet and walls. Z-Wave forms a mesh network, in which one device has the decision making power that is usually referred to as the primary controller or hub. The numerous secondary node connected via the primary node as called the sensors or target nodes. When a new smart device is added to the network it is assigned a Node ID by the controller for authentication.

Each home automation company has two choices for developing a mobile application to control its smart devices:
First, use a pre-existing platform
The home automation apps can be built by integrating any of the pre-existing platforms such as Samsung SmartThings, the Azure IoT Suite, Oracle IoT, and Google Cloud IoT with the Android Studio. This process becomes economical as a number of reference reports and research papers are available and more than seventy per cent of Android Developers are familiar with the Android Studio.

Second, create a customised platform
Prior to the app development, you need to build the platform keeping in mind the requirement of your app. Most of the home automation apps need to build using AI technologies, finding a suitable pre-defined class for such superior functionalities is rare. This approach requires a high budget and development time, but the end results are quite promising.

The functionality of a smart Home Application:

The best way to encapsulate network protocols and smart home devices is by creating a mobile app that can serve as a user interface. In order to begin with the development, first, all the aspects of the user’s requirements should be analysed. The developers can choose any of the two options given below:

A single-task IoT app: Using this approach, you can create an app that manages only a distinct device, it can be a climate or lighting sensor device, or a sound level based device, or any other smart home device. This approach is accompanied by many shortcomings; the most distinct one is that the users need to install a different app for each of his/her smart devices. This approach also has some pros, the development process is relatively elementary and such apps can be developed in a very short span of time with high accuracy and a low budget.

Multitasking applications: It is quite evident by the name itself, these apps permits the user to control a set of smart home devices. As the prime objective for using an Android application is to provide an optimum user-experience, this approach has an upper-hand in comparison to the previous one. Such apps are a one-stop solution for the user, hence are more favourable. However, these apps require a dedicated IT team for its creating as well as maintenance that can be severe for low budget firms.

The final call is yours!