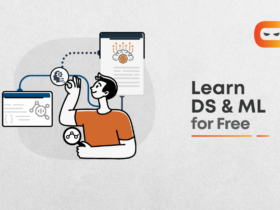 Chicken and egg problems are major headaches for several entrepreneurs. Many machine learning (ML) problems affect an identical dilemma. If we all know A, we will determine B. Or, if we all know B, we will determine A. Either way solves the ML problem. Unfortunately, we don’t know A or B. But in ML, it is often solved by one powerful algorithm called Expectation-Maximisation Algorithm (EM).

In stats, an Expectation–Maximisation (EM) algorithm is used as an iterative method to know out (local) maximum likelihood or maximum a posteriori (MAP) estimates of parameters in statistical models, where the model depends on unobserved latent variables. The EM iteration is used as an alternate between the performing an expectation (E) step, which creates a function for the expectation of the log-likelihood evaluated using the present estimate for the parameters It is important for the maximisation (M) step, which help in computing parameters maximising the expected log-likelihood found on the E step. These parameter-estimates are then wont to determine the distribution of the latent variables within the next E step.

On the opposite hand, the Expectation-Maximisation algorithm is often used for the latent variables (variables that aren’t directly observable and are literally inferred from the values of the opposite observed variables) too so as to predict their values with the condition that the overall sort of probability distribution governing those latent variables is understood to us.

This algorithm is really at the bottom of the many unsupervised clustering algorithms within the field of machine learning. It was explained, proposed and given its name during a paper published in 1977 by Arthur Dempster, Nan Laird and Donald Rubin. it’s wont to find the local maximum likelihood parameters of a statistical model within the cases where latent variables.

The essence of the Expectation-Maximisation algorithm is to use the available observed data of the dataset to estimate the missing data then using that data to update the values of the parameters. allow us to understand the EM algorithm intimately.

How Does It Work in Detailed Explanation?

The basic idea behind the EM algorithm is to use the observed data to estimate the missing data then updating those values of the parameters. keeping the flowchart in mind, allow us to understand how the EM algorithm works.

The Gaussian Mixture Model, or GMM for a brief , maybe a mixture model that uses a mixture of Gaussian (Normal) probability distributions and requires the estimation of the mean and variance parameters for every. There are many techniques for estimating the parameters for a GMM, although a maximum likelihood estimate is probably the foremost common.

Consider the case where a dataset is comprised of the many points that happen to be generated by two different processes. The points for every process have a Gaussian probability distribution, but the info is combined and therefore the distributions are similar enough that it’s not obvious to which distribution a given point may belong.

The processes wont to generate the info point represents a latent variable, e.g. process 0 and process 1. It influences the info but isn’t observable. As such, the EM algorithm is an appropriate approach to use to estimate the parameters of the distributions.

In the EM algorithm, the estimation-step would estimate a worth for the method latent variable for every datum and therefore the maximization step would optimise the parameters of the probability distributions in an effort to best capture the density of the info. the method is repeated until an honest set of latent values and maximum chances are achieved that matches the info.

We can imagine how this optimization procedure might be constrained to only the distribution means, or generalised to a mix of the many different Gaussian distributions.

Expectation-Maximisation (EM) is an important algorithm for the maximum likelihood estimation which is used in models with hidden variables (usually missing data or latent variables). It involves iterative computing expectations of terms within the log-likelihood function under the present posterior, then solving for the utmost likelihood parameters. There are some common applications of the EM  which include fitting mixture models, learning Bayes net parameters with latent data and learning hidden Markov models.