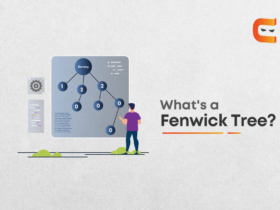 A quick guide to Binary Indexed Tree or Fenwick Tree

One of the most famous interview questions for beginners as well as Java developers with two-three years of experience is the difference between ArrayList and LinkedList.

Now let’s have a brief introduction about “What is ArrayList?” and “What is LinkedList?” ArrayList is a growable array which has an initial capacity of ten. After reaching its maximum capacity, a new ArrayList is created with increased capacity, and all the records will be copied in the new ArrayList. The formula for new ArrayList’s capacity is New Capacity = Current capacity*1.5+1 ArrayList can be created with the required initial capacity. Since ArrayList implements a random access interface, it is good to use when its elements are fetched frequently. ArrayList is not good to use for frequent addition and deletion of elements due to multiple shift operations.

LinkedList internally maintains doubly-linked lists which store the memory address of previous and next object, so there will be no kind of structure which will keep memory address of the previous node and next node. There is no initial capacity defined for LinkedList, and it is not implementing a RandomAccess interface. LinkedList is faster than ArrayList while inserting and deleting elements, but it is slow while fetching each element.

Apples and Oranges are different –
Let’s get into the differences between ArrayList and LinkedList.

Applications and Limitations
In an ArrayList, the maximum number of elements in the data structure should be none else
you cannot opt for ArrayList. You can initialise with an initial capacity which protects duplicating
and wrong array allocations. ArrayList is indexed by int. So, it can go up to 32bits. Hence in an
ArrayList, it is not possible to store elements that are more than 2^32.

Conclusion
As you’ve reached the end of this article, we hope you are now familiar with the pros and cons of the two. It is dependent on the usage of the list and your requirement. We have summarised implementation, some of the main applications and limitations to make it easier for you to take the first few steps in mastering these concepts. You decide to choose the better option for your use-case.