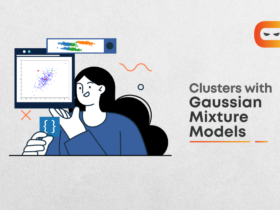 Floyd’s cycle-finding algorithm is a pointer algorithm that uses only two pointers, moving through the sequence at different speeds. It states the usage of Linked List in this algorithm and its output.

The purpose is to determine whether the linked list has a cycle or not. First, you keep two pointers of the head node. At each iteration, you move one of the pointers by two steps and the other one by one step. So you have two pointers tortoise and the hare. Eventually one of the two cases will happen:

For me, the most intuitive way of seeing this is as follows:

Just for instance, let’s check out on this example:

Now, let’s create a table of where the hare and the tortoise will be until they meet:

As you can check, their distance is shortened by 1 on each step of the algorithm if they are in a loop. They are bound to meet, if there exists a loop.
We can use this logic to find a loop in a singly linked list.

I will be discussing using Floyd’s Cycle Detection Algorithm, well known as ‘tortoise-hare’ algorithm. Well, as we are in the 21st century, and an era of supercars, I will be using some cars to explain the algorithm.

Suppose we have two cars namely Bugatti Veyron and Mercedes Benz, as we know top speed of Bugatti is double of Mercedes, and both are supposed to have a race and we have to determine whether the race track has a loop or not.

Clearly there will be two cases

In this case Bugatti will take a miles ahead leap from Mercedes and will reach the racing line first followed by Mercedes sometime later.

In this case again Bugatti will take a miles leap from Mercedes BUT as we have a loop in race track, he will be covering same track again and again , till he meets Mercedes rider again during the course, and he will be like “Dude! I think we met earlier. Aren’t we stuck in a LOOP or something?”

Well, this racing example can be understood more clearly, by the following picture representation, where the racecourse is marked by different flags. Here on we will be referring Bugatti as ‘Car B’ and Mercedes as ‘Car M’

Initially both the cars are at flag-1 together for first time.

When the next reading was taken, Car B has already taken a leap and reached flag-3 while Car M was at flag-2.

In next time interval Car B has reached flag-5 and Car M is at flag-3.

Well Car B has completed the loop, still unaware and reaches flag-3 whereas Car M is at flag-5.

Moving ahead in loop Car B reaches flag-5 and Car-M has reached flag-6.

At this instant both are at the same flag. So they will come to notice that they are stuck in a loop.

Turning geek mode on, we will be using above example to solve our linked list problem.

Here in place of cars we will be having two pointers,

which will traverse through the loop and where fast-Pointer move double the speed of slow-Pointer covering two nodes in one iteration as compared to one node of slow-Pointer.

We will be having same case here:

Below is the Java implementation of the code:

Detecting start of a loop in singly Linked List:

As we have learnt above, we can detect with the help of our beloved cars(i.e slowPointer and fastPointer) that if a loop is present in the given Linked List.

What we need to do in case we need the starting point of the loop?

By now it had already started itching in mind that, Why the hell does moving slowPointer to start of the list and moving both pointer one step at a time will find the start of the loop? (insert some angry smiley).

For that we have a small proof, which will explain everything in a jiffy. Trust me!

Since fastPointer travels with double the speed of slowPointer, and time is constant for both when the reach the meeting point. So by using simple speed, time and distance relation.

2(x+y)= x+2y+z
=> x+2y+z = 2x+2y
=> x=z
So by moving slowPointer to start of linked list, and making both slowPointer and fastPointer to move one node at a time, they both will reach at the point where the loop starts in the linked list.
As you will notice the below code is mostly the same as of above code where we needed to detect, whether a loop is present or not, and then if a loop is there we move forward to tracing its starting location.

CASE 1: When the meeting node of both pointers in a loop is start node or root node itself, in this case by just setting previousPointer to NULL will work because previousPointer is already pointing to the last node of the linked list.

CASE 2: When the meeting node of both pointers in a loop is in-between the linked list, in this case, the first task is to identify the start of loop node in the way as we saw above and then by setting fastPointer, which is already pointing to last node of the list to NULL will work.

If you want to master the linked list then you should read this article.

If you are preparing for interviews at top product-based companies then CodeStudio is your one-stop destination. It is a great platform developed by some aspiring enthusiasts and working professionals who have experience in companies like Google, Amazon, Microsoft.

At CodeStudio you get interview problems, interview experiences, and practice problems that can help you to land your dream job.