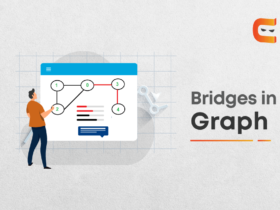 What are bridges in a graph?

A hash table is an unordered collection of key-value pairs, where each key is unique.

Hash tables offer a combination of efficient lookup, insert and delete operations. They are used to implement map and set data structures in most common programming languages. In C++ and Java they are part of the standard libraries, while Python and Go have built-in dictionaries and maps.

Neither arrays nor linked lists can achieve this:

For example, student records for a class could be stored in an array C of dimension 10000 by truncating the student’s ID number to its last four digits: H(IDNum) = IDNum % 10000 Given an ID number X, the corresponding record would be inserted at C[H(X)].

The simplest way the hash table may be explained as a data structure that divides every element into equal-sized categories, or buckets, to permit quick access to the elements. The hash function finds that which element belongs to which bucket. They can also be definite as data structure those acquaintances keys with values. The basic procedure is to support powerfully and finds the consequent value.

Basically it is the one-dimensional array indexed by an integer value computed by an index function called a hash function. They are sometimes referred to as scatter tables. They are containers that represent a group of objects inserted at computed index locations. Each object inserted in this table is related with a hash index. The process of hashing involves the computation of an integer index (the hash index) for a given object (such as a string).

If calculated correctly, the hash calculation (1) should be quick, and (2) when finished frequently for a set of keys to be inserted in a table should create hash indices consistently spread crossways the variety of index values designed for the table. In algorithms a hash table or hash map is a data structure that uses a hash function to efficiently map certain identifiers or keys (student name) to associated values (e.g. that students enrolment no.).The hash function is used to transform the key into the index (the hash) of an array element (the slot or bucket) where the corresponding value is to be sought.

A hash function is used to map each key to different address space but practically it’s not possible to create such a hash function that is able to do this and the problem called collision occurs. But still, it is done up to the greatest feasible case so that the chances of collision should be kept minimum. In a well-dimensioned table, the regular cost (number of instructions) for each lookup is self-determining of the number of elements stored in the table.

But still have all the problems, they are much more proficient in many cases comparative to all other data structures like search trees or any other table lookup structure. That the reason behind using these tables in all kinds of computer software, particularly for associative arrays, database indexing, caches, and sets.

Let’s try to understand hashing with some examples as follows:

A good hash function should:

Note: Hash functions are NOT random in any sense.

Collision: It is a situation in which the hash function returns the same hash key for more than one record, it is called a collision. Sometimes when we are going to resolve the collision it may lead to an overflow condition and this overflow and collision condition makes the poor hash function.

What if we insert an element say 15 to existing hash table?

But already arr[1] has element 8. Here, two or more different elements pointing to the same index under modulo size, This is called a collision.

Collision Resolution Technique: If there is a problem of collision occurs then it can be handled by applying some technique. These techniques are called as collision resolution techniques. There are generally four techniques which are described below.

Example: Let us consider a hash table of size 10 and we apply a hash function of H(key)=key % size of the table. Let us take the keys to be inserted are 31,33,77,61. In the above diagram we can see at same bucket 1 there are two records which are maintained by linked list or we can say by chaining method.

Example: Let us consider a hash table of size 10 and the hash function is defined as H(key)=key % table size. Consider that following keys are to be inserted that are 56,64,36,71.

In this diagram we can see that 56 and 36 need to be placed at same bucket but by linear probing technique the records linearly placed downward if place is empty i.e. it can be seen 36 is placed at index 7.

The hash functions for this technique are:

Where, p is a prime number which should be taken smaller than the size of a hash table.

Following are the basic primary operations of a hash table.

Before inserting elements into an array. Let’s make array default value as -1. -1 indicates element not present or the particular index is available to insert.

Inserting elements in the hash table:

Searching elements from the hash table:

Deleting an element from the hash table:

Here, we are not going to remove the element. We just mark the index as -1. It indirectly deletes the element from an array.