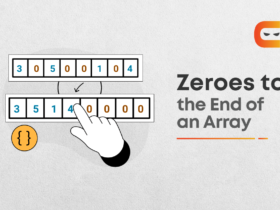 How Do You Move All The Zeros To The End Of The Array?

A Segment Tree is basically said to be an arrangement that permits answering range queries over an array effectively, while still being flexible enough to permit modifying the array. This includes finding the sum of consecutive array elements a[l…r], or finding the minimum element during a such a variety in O(logn) time.

Between answering such queries the Segment Tree allows modifying the array by replacing one element, or maybe change the weather of an entire subsegment (e.g. assigning all elements a[l…r] to any value, or adding worth to all or any element within the subsegment).

Segment Tree may be a basically a binary tree used for storing the intervals or segments. Each node within the Segment Tree represents an interval. Consider an array A of size N and a corresponding Segment Tree
T.

In general, a Segment Tree may be a very flexible arrangement and an enormous number of problems are often solved with it. Additionally, it’s also possible to use more complex operations and answer more complex
queries (see Advanced versions of Segment Trees). especially the Segment Tree is often easily generalised to larger dimensions. as an example with a two-dimensional Segment Tree, you’ll answer some or minimum queries over some sub rectangle of a given matrix. However only in O(log2n) time.

A critical property of Segment Trees is, that they require only a linear amount of memory. the quality Segment Tree requires ‘4n’ vertices for performing on an array of size ‘n’.

Concept of Segment Tree: As we can see here, a segment tree is a data structure used to store information from various pieces of data about array segments and answer segment queries efficiently. There are two main operations performed on a segment tree:

It is noted for a fact that both range/query (i, j) and update(i, val) take log(n)log(n) time, where ‘n’ is the number of elements in the Segment Tree.

Implementation / Building of a Segment Tree:

Let us now understand how each of the function is working:

The theoretical time complexities of both previous implementation and this implementation is same but practically this is found to be much more efficient as there are no recursive calls. We simply iterate over the elements that we need. Also, this is very easy to implement.

The query for Sum of given range: Once the tree is made, the way to get the sum using the constructed segment tree. The following is the algorithm to get the sum of elements.

Update a value: Like tree construction and query operations, the update also can be done recursively. We are given an index which needs to be updated. Let diff be the value to be added. We start from the basis of the segment tree and add a difference to all or any nodes which have given index in their range. If a node
doesn’t have a given index in its range, we don’t make any changes to that node.

So that was a brief introduction to this topic, but there is much more to discover in Data Structures and Algorithms.

To explore our courses and blogs on Data Structures, visit www.codingninjas.com.