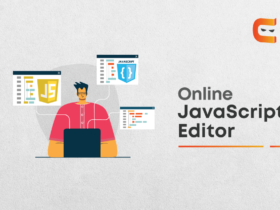 Best JavaScript Editor: Options For You To Choose From

Ionic framework is a mobile application development framework based on HTML5 that has a widespread utility in building hybrid applications. The best part about ionic is that it is open-source. The leading alpha version of the ionic framework was introduced in November 2013 by Drifty Co-operation. After this release, there was no going back for ionic, and now many variants of ionic are ruling the tech-zone. The ionic SDK is used for the front-end development of mobile applications that are compatible with Android, Windows as well as iOS, using a shared codebase.

It handles the overall User-Interface of the applications and implements all the components you need to make your UI attractive yet immaculate. Hybrids applications have the upper hand over native applications, primarily in terms of platform support, development speed, and the ability to access third-party applications. Hybrid applications can be referred to as small websites that run in a browser shell of a mobile
application that can access the native platform layer. Ionic implements web applications and programming languages like HTML, CSS, Javascript, Typescript, and Angular for building mobile applications.

It is somewhat similar to “Bootstrap for Native” but can support native cellular components and layout as well. Slick animations can also be created using it. Ionic creates applications that behave differently. Ionic has some inbuilt components that serve as a mobile platform. Except for all these featured ionic comes with very high throughput, it gets the least interrupted due to DOM manipulation.

For ionic to run as a native app, a native wrapper like Cordova or PhoneGap is essential. Cordova proper is highly recommended for your native apps. Ionic integrates Cordova by using its command-line interface as it reduces the coding efforts and time of the developer by eradicating the need for writing the code from scratch. The framework has official integrated support for Angular and Reaction. The support of Vue is currently in the pipeline. Ionic is often regarded as the best cross-platform and is the easiest to learn.

Facilities Cross-Platform Mobile Application Development
Nowadays, mobile phones having various operating systems are available. While developing an application, we must keep in mind that it should be compatible with the various available operating systems. The ionic framework allows us to create applications that can run on numerous operating systems by using a single unified codebase. During the development process, we can have a preview of the user interface on iOS, Windows and Android.

Helps in Creating innovative Designs
By using the ionic framework, developers can create robust yet straightforward designs. By using the customisable components and themes, novel and attractive designs can be created for your application.

It is entirely based on Angular JS
Angular is a globally comprehensive framework for developing mobile and web-based applications. Angular incorporates various HTML extensions that have been very important for the developers. Angular JS provides the most optimal solution with the Ionic framework. On collaboration, they offer attractive user-interface designing components for our mobile application.

Incorporates Cordova Plugins
The ionic framework can support many plugins to extend its features. It provides a plugin for Cordova that helps designers to create an ideal mobile application by adding contemporary design elements to the application.

Provides a Default User-Interface
Ionic includes some default CSS and JS components that support developers in creating mobile applications. The predefined CSS class covers most of the UI components and features, but they are made extendible so that user can customise them further.

Enhances performance
Ionic creates an ecosystem that is user-friendly as well as developer-friendly. The developers can include these components to enhance the performance of the application.

Numerous Embedded plugins
You are allowed to use a variety of plugins and are supported by Ionic to fulfil the complex business requirement. These plugins have the power to make your mobile and web application future-ready. You can embed as many user-friendly features as you can.

Reliable Technology
The ionic framework is based on web-technology. If you invest your valuable time and resources in learning ionic, it will eventually be fruitful, as it is a future-proven technology. Whenever you want to update your code, you can do that efficiently and effortlessly.

Why use the Ionic framework?

It enables developers to implement Cordova libraries in collaboration with AngularJS to create highly interactive applications. It allows us to create multi-platform applications.

It is an open-source framework
Ionic is an open-source framework; still, it is highly reliable and secure. It provides a native look to our application, along with cost-efficiency. Learning ionic is very easy as it incorporates the functionalities of the popular web-based programming languages like HTML, CSS, Javascript, etc., it is extensible and compatible with many plugins.

A unified codebase
Developing separate native applications for ios, Android, and windows is very time-consuming, as the overall syntax of the code is quite different. Ionic allows us to develop cross-platform applications by using a single codebase, the code components are highly reusable, and there are no strict syntax variations and restrictions. It saves the time spent in rewriting the code.

The Core Developers are active
The Ionic community is very active; they keep on updating their framework regularly with the latest features. They have online forums were new developers can ask queries and seek expert opinions and suggestions. Ionic’s collaboration with Angular and Cordova makes the community even denser.

Simple Testing
Ionic allows us to run the apps on its own browser. We can even perform testing by using the command-line interface or use a simulator to test the app on all the operating systems simultaneously.

Ionic is really similar to “Native” frameworks
The crowd is familiar with the native user interface designs. It is not necessary that web- applications should look like native apps, but to provide a user-friendly environment, we must make sure that the user interface components are not totally strange. This HTML5 mobile framework allows us to use all the native UI components in our hybrid apps like Form Inputs, Buttons, Lists, Navigation, Popups and prompts, Tabs, Sliding Boxes, Layouts and many more.

Ionic provides Side Menu variations
The sliding menu library provided by ionic is found only in high-quality applications like Facebook. Every UI component provides smooth interaction and super-good user-experience. It works in the same manner as we want, we can further customise it according to the business requirement.

Ionic is a powerful and contemporary technology that enables us to create web-based and mobile-based novel applications that are much faster and efficient in comparison to the native application development strategies. This strategy allows us to learn many more computer languages that help us to build a strong career profile. It offers us a variety of features to make the UI distinct.

Still, sometimes ionic gets beaten by the native applications in terms of speed and performance, to overcome this shortcoming, we can use plugins with ionic. The addition of plugins can increase the performance exponentially and reduce the run time significantly. Ionic is economically very beneficial as we can have a quick launch of the application on all the three platforms, without having any delay. The development cost is reduced by a factor of three, as instead of three applications, only one app is required.

The testing and maintenance of the application also become very smooth and effortless. There are no pre-requisites for learning ionic; you can directly start with ionic; you don’t need to learn native application development.

However, it will be beneficial for integrating plugins if you have prior knowledge of native
applications. In the end, it is the developer’s decision to choose the correct platform and tool so that his work is made easier, and the end results are commendable.

To learn more about this topic, visit here.