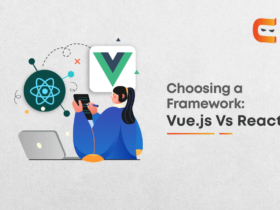 Vue JS Vs React in 2021: Which Framework to Choose and When

With most of the professions now going online – requiring a website to run or aid their businesses, there has never been a better time to become a website developer. The “How” to become a web developer may seem a daunting question if one doesn’t know the “What” of it. In this post, we will explore the two types of web developers – front-end and back-end.

What is Front End Development?

There are multiple stages in the website creation process. It starts with a designer coming up with a design idea for the website. The computer science experts who convert the idea and realise the design with the aid of programming are known as Front-end developers.

Front-End development is how a particular design gets realised into a website.

Skills learnt during the course

A front-end developer’s task is to take the design idea and with the help of technology, convert it into a website. Front end developers produce code consisting of HTML, JavaScript, and CSS. A front-end expert adds contents of various kinds such as images, buttons, search-bar, internal links, navigation bar, forms and payment gateways.

Average Salary: According to PayScale, the average front end developer salary in India is around Rs. 4,87,039 per annum. This figure can range between Rs. 10,00,000 per annum and Rs. 1,95,000 per annum depending on various factors.

What is Back End Development?

Back-End developers make the use of the “behind the scene” databases smooth. E.g. when one enters the credentials and get into their social media account in almost no time, its the very back end developers who make it possible!

The back end part of the website could include a database (e.g. user information on social media websites – their name, friends, photos) and a programming language (Python, Ruby, JavaScript) which interacts with the server that contains the databases and hosts the website.

Skills learnt during the course:

Job Profile: A back-end developer’s job is to make sure their company’s website is operating swiftly. These developers ensure that the data requested by some user is always available.

Average Salary: According to PayScale, the average back end developer salary in India is around Rs. 3,93,054 per annum. This figure can range between Rs. 8,05,000 per annum and Rs. 8,59,884 per annum depending on various factors.