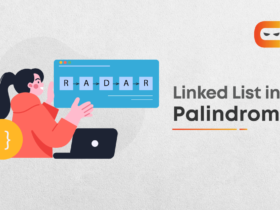 Check if a Linked List is Palindrome or Not?

Sorting is an arrangement of data in a particular order.

But if we talk about sorting in Data Structure then it’s more relevant to rearrange the data or element in ascending or descending order which can be lexicographical, numerical, or maybe user-defined. For example, Consider you have five siblings and you want to arrange them according to height.

Now if you wish to arrange them in increasing or decreasing order of height and then algorithm, you’ll perform to do this task is sorting. But more interestingly in How much time, you can do it? Suppose if you do it in five sec and when your brother is given a chance and he does it in three sec then his idea
would be best among both of you. That’s the complexity of your algorithm.

What is Sorting in Data Structure?

In other words, you can say that sorting is also used to represent data in a more readable format. Some real-life examples of sorting are:-

The main advantage of sorting is time complexity and that’s the most important thing when you solve a problem because it’s not enough you’re able to solve a problem but you should be able to solve it in the minimum time possible. Sometimes problems can be solved easily and quickly based on sorting which can prevent you from every Coder’s Nightmare i.e. TLE (Time Limit Exceeded).

Although there is no. of sorting algorithms best algorithm is which can solve a problem in the minimum time and minimum space required to do so. Some types of the Sorting algorithm are:-

And So on n-1 passes i.e. 7 passes it will check further. The one thing that makes this algorithm time consuming is even though the array is sorted in the second pass but it will continue going to check up to n-1 passes.

Not much clear Right? Alright, we’ll take a look at how this algorithm works which will give us a clear idea about this algorithm.

Although there is no. of sorting algorithms mostly used are discussed above and others are also important which is used in advanced Data Structure such as-

Facts: One thing that comes to our mind is why to study it when we have already inbuilt sorting function in Python, C++ and Java. But you should know that

‘In place’ means whenever you are sorting and you don’t require any extra space except the input space excluding the constant space which is used for variables or iterators. It also doesn’t include the space used for stack in the recursive algorithms. Now, In merge sort, when we perform merging then the merge function requires extra linear space which is not constant. So, it is not in-place. Hence, it is called ‘out of place’ algorithm or sorting.

On the other hand, Quicksort is kind of sorting which uses only some constant number of variables for partitioning purpose. So, it is an in-place algorithm or sorting.

Stable and Not stable Sorting:-

One thing should be kept in mind in the case of an unstable sort, the order of appearance/occurrence before and after sorting is not necessarily preserved.

Merge Sort is a “Non-Adaptive” Sorting algorithm because the order of the elements in the array doesn’t matter So the time complexity of algorithm will always be O(nlogn).

Which sorting is best in data structures?

Every sorting algorithms have their own advantages and disadvantages. Select the sorting algorithm that is best fitted for your data. If you’re constrained in space the choose heap sort. If you need something stable choosing merge sort will help you. For almost sorted data, considering insertion sort is O(n) time!

Inbuilt sorting algorithms use hybrid sorts which are combination of different basic sorting algorithms. Introsort (std::sort in C++) which runs quick sort and switches to heap sort when the recursion gets too deep. This way, you get the fast performance of quick sort in practice while guaranteeing a worst case O(nlogn) run time.

Which sort is the fastest?

Though the worst-case complexity is O(n^2), on an average it gives us O(nlogn) time complexity. You can also think of considering Merge sort, which is very similar to Quicksort but has more complexity than quicksort.

When to use which sorting technique?
Q: Is the occurrence of the same element important?
Yes: Insertion, Bubble, Merge, Quick
No: Heap, Quick

We have three options in order to sort one million data — Heapsort, Merge Sort and Quicksort. Selecting the suitable sorting algorithm will still depend if occurrence of the same element is important and memory for extra space is not an issue.

What are the types of sorting in data structure?

What are the three types of sorting?

What is Sorting and types of sorting in data structure?

How many types of sorting are there?

Which type of sorting is best?

The best sorting technique can be decided by a variety of factors – by the size of data to be sorted, machine capabilities and memory requirements.

What is sorting with an example?

For more problems, you can also login to our practice platform and enhance your data structure and algorithm skills on CodeZen.