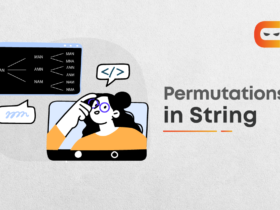 Print All Permutations in String

In an era when the transfer of data is happening every second as we speak, computer networking becomes an important subject of study. It is a subject that every good programmer must be thoroughly familiar with. One important topic under this is socket programming. In this article, we will discuss the topic of socket programming and study various ways of its implementation in C++.

Socket programming in C++ is the way of combining or connecting two nodes with each other over a network so that they can communicate easily without losing any data. One socket (node) listens on a particular port at an IP, while the other socket reaches out to the other to form a connection. The server forms the listener socket while the client reaches out to the server.

What is a Socket?

If we take a real-life example then the socket we see in reality is a medium to connect two devices or systems. It can be either a phone charger plugging into the socket or a USB cable into our laptop. In the same way, Sockets let applications attach to the local network at different ports. Every time a socket is created, the program has to specify the socket type as well as the domain address.

Sockets are a mechanism for exchanging data between processes. These processes can either be on the same machine, or on different machines connected via a network. Once a socket connection is established, data can be sent in both directions until one of the endpoints closes the connection.

I needed to use sockets for a project I was working on, so I developed and refined a few C++ classes to encapsulate the raw socket API calls. Generally, the application requesting the data is called the client and the application servicing the request is called the server. I created two primary classes, ClientSocket and ServerSocket, that the client and server could use to exchange data.

The goal of this article is to teach you how to use the ClientSocket and ServerSocket classes in your own applications.

Int socketcr = socket( domain , type, protocol )
Socketcr = It is like a descriptor ,an integer (file handle)
Domain = integer type, communication domain, example = AF_INET6 (IPv6 protocol)
Type = communication type
SOCK_DGRAM: UDP(unreliable, connectionless)
Protocol = Protocol value for Internet Protocol(IP), which is 0. This is the same number which appears on the protocol field in the IP header of a packet. (man protocols for more details)

A socket is an object similar to a file that allows a program to accept incoming connections, make outgoing connections, and send and receive data. Before two machines can communicate, both must create a socket object. A socket is a resource assigned to the server process. The server creates it using the system call socket(), and it can’t be shared with other processes.

Setsockopt: This helps in manipulating options for the socket referred by the file descriptor socket. This is completely optional, but it helps in the reuse of address and port.  Prevents error such as: “address already in use”.

Blind: After the creation of the socket, bind function binds the socket to the address and port number specified in addr(custom data structure). In the example code, we bind the server to the localhost, hence we use INADDR_ANY to specify the IP address.

listen() attempts to continue to function rationally when there are no available descriptors. It accepts connections until the queue is emptied. If descriptors become available, a later call to listen() or accept() re-fills the queue to the current or most recent backlog’, if possible, and resume listening for incoming connections.

Accept: The accept() system call is used with connection-based socket types(SOCK_STREAM, SOCK_SEQPACKET).  It extracts the first connection request on the queue of pending connections for the listening socke sockfd, creates a new connected socket, and returns a new file descriptor referring to that socket.  The newly created socket is not in the listening state. The original socket sockfd is unaffected by this call. The argument sockfd is a socket that has been created with socket(2), bound to a local address with bind(2), and is listening for connections after a listen(2).

Socket connection: Exactly same as that of server’s socket creation

Connect: The connect() system call initiates a connection on a socket. If the parameter s (a socket) is of type SOCK_DGRAM, then connect() permanently specifies the peer to which datagrams are to be sent. If s is of type SOCK_STREAM, then connect() attempts to make a connection to another socket. The name parameter specifies the other socket. The connect() function is used to create a connection to the specified foreign association. The parameter s specifies an unconnected datagram or stream socket. If the socket is unbound, the system assigns unique values to the local association, and the socket is marked as bound. For stream sockets (type SOCK_STREAM), an active connection is initiated to the foreign host using the name (an address in the namespace of the socket). When the socket call completes successfully, the socket is ready to send/receive data.

Steps to establish connection in socket:

The system calls for establishing a connection are somewhat different for the client and the server, but both involve the basic construct of a socket. A socket is one end of an interprocess communication channel. The two processes each establish their own socket.

The steps involved in establishing a socket on the client side are as follows:

The steps involved in establishing a socket on the server side are as follows:

In numerous examples, what we see is how a single client is connected to a socket in a server. However, this is not the case in day to day life. We have multiple clients connected to a server and each has a different socket.

One way to achieve this feat is by using multithreading. But only someone who has done multithread programming knows it can lead to madness. They are very difficult to code and debug. Even if you end up programming them neatly, the results can be unpredictable. Not to mention the fact that they are not scalable for a large number of clients and there is also a chance of deadlocks occurring.

To tackle these issues, we try to support multiple clients on a network without using multithreading. To help us with this, we have a special function known as select().

What is the select() function?

It is a Linux command which uses fd_set data structure and allows us to monitor multiple file descriptors. It gets activated as soon as any file descriptor sends data. Hence it works like an interrupt handler. If some data is there that is to be read on one of the sockets then it is select() that provides that information. It then returns the total number of socket handles that are ready and contained in the fd_set structures.

There are four macros that are associated with the select function, used for manipulating and checking the descriptor sets.

Using these four macros and the select function, one can handle multiple clients using a single thread.

Here is an example server side code which echos back the received message. Jump here for the explanation of the code.

Explanation of the code:

In the above code we first create an fd_set variable readfds, which monitors all the clients’ active file descriptors as well as the active file descriptors on the main servers listening socket. For an old client sending data, readfds would already be activated and thus we’ll check in the existing list to see which client has sent the data. When a new client connects to the server, master-sock will be activated and a new file descriptor will be open for that particular client. We store this file descriptor in a client_list and add it to the readfds variable in the next iteration to monitor the activity from the client.

Use of socket programming:

Socket programs are used to communicate between various processes usually running on different systems. It is mostly used to create a client-server environment. This post provides the various functions used to create the server and client program and an example program. In the example, the client program sends a file name to the server and the server sends the contents of the file back to the client. Socket programming usually pertains to the basic communication protocols like TCP/UDP and raw sockets like ICMP. These protocols have a small communication overhead when compared to underlying protocols such as HTTP/DHCP/SMTP etc.

Some of the basic data communications between client and server are:

What is TCP socket programming?

What is the best language for socket programming?

Java and C#/C++ are the best languages for socket Programming.

What is a socket HTTP? Why is socket programming used?

Socket programming is used to create endpoints to establish communication between network nodes.

Can socket programming be done in Windows?

Yes, socket programming can be done in Windows using Winsock.

Computer Networking is an important subject of study for every programmer. Mastery in understanding transfer of data between two or more machines requires thorough knowledge in a number of topics. One such important topic is socket programming. Socket programming in C++ is the way of combining or connecting two nodes with each other over a network so that they can communicate easily without losing any data. This article discusses the topic with its implementation in C++ in detail.

To read more about Networking, check out this article.