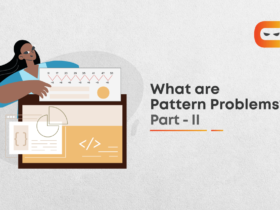 What Are Pattern Problems? | Part 2

Outlining the difference between Kotlin and Java, the article helps you understand the usage of the programming languages.

According to PYPL Popularity of Programming Language Index, Java is the second most popular
language whereas Kotlin occupies the 12th position. But it is interesting to see how fast Kotlin is
gaining popularity. In this article, we discuss the differences between the two. Java was developed in 1995 by James Gosling and was later acquired by Oracle. Kotlin is comparatively new in the domain of Android development. It first appeared in 2011 and was developed by JetBrains. It is a statically typed, cross-platform, general-purpose language.

Google announced Kotlin to be its preferred programming language for Android development
in 2019, and therefore Android studio has built-in support for Kotlin. Another interesting relation between the two languages is in their name: Java is named after the Indonesian islands of java, while Kotlin has been named after the Kotlin islands near St. Petersburg. Both languages predominantly support the object-oriented paradigm. Armed with these facts, let’s explore the major distinctions and features of both and figure out what a new Android developer must learn according to the latest trends and stay updated in this industry.

Code conciseness
Kotlin has a serious lead in this aspect. A code written in Java can be written in half the number
of lines. The code written in Kotlin is concise and crisp. It reduces the room for error to creep in.
Here is an example to better visualise this:

Coroutines: They are often termed as light-weighted threads. They’re supported by Kotlin but don’t have much usable support in Java. Creating too many threads can make an application slower and degrade its performance, which is why coroutines were introduced to write asynchronous, non-blocking code. Coroutines help execute multiple tasks concurrently.

Data classes: One major drawback of Java is its elaborate syntax and boilerplate codes. Kotlin somewhat resolves this issue by a feature called data classes. In Java, you will have to create the same lengthy code for just creating classes which just hold data. Kotlin uses the term data before such classes and eases the effort to create a syntactically longer program. The data classes cannot be abstract, open, sealed, or inner. This is to ensure consistent and meaningful
the behaviour of data classes.

Extension functions: It is quite a powerful feature that Kotlin offers but Java doesn’t. It allows the
developer to extend a class without inheritance or using a design pattern such as decorators. It
gives you the freedom to write a function for a third party class which you otherwise cannot
modify. The class that is extended is declared with “.” with the new function and its arguments.

Higher-order functions and lambdas: It can be simply recalled as functions that take in functions as parameters and can return a function as output. Lambda expressions can be seen as shorthand instead of elaborate function declaration and initiation. It is directly passed as expression. The syntax of the lambda expression is: val sum: (Int, Int) -> Int = { x: Int, y: Int -> x + y }

Inline functions: The inline function was introduced to reduce runtime penalties by moving the higher-order functions and lambda expression to the place where they are called. Inline reduces the cost to the pointer to go repeatedly to the stack where the function is stored. It brings the whole code virtually to that very place of compilation. Java doesn’t have any feature for inlining. However, it still allows this problem to be solved with the final method.

Non-private fields: Kotlin has properties instead of fields. A property can have a different level of visibility, but the getter must be at least as visible as the setter. Each property is backed by a field which is always private. There are non-private fields in Kotlin. Encapsulation is essential for security and ensures accessibility but in some scenarios, public fields are essential where the callers need to change in parallel to representation.

Null safety: It is also known as void safety, is still a major difficulty with older languages such as Java. Null safety ensures that in an object-oriented language that none of the object references must have null values. Since it leads to run-time exception consequently abnormal termination of the program. In Kotlin, the type system distinguishes between references that can hold null and those that cannot. You can even explicitly check for null conditions.

Smart casts: In Java, you must explicitly check the type of objects and variables. Kotlin provides the is and ! is operators to check type. Kotlin has a special feature where it casts the object to the desired type to give the output accordingly. Java doesn’t have any such provision. Therefore, you need to make casting manually except the implicit conversions of the compiler.

Static members: Kotlin has no feature ads or static members. Classes are simply declared as a class in Kotlin. Java, on the other hand, supports the keyword static and supports static members, which are created once and shared across all instances of the class.

Wildcard types: In general, “?” is used to show an unknown type. Also known as a wildcard, “?” is used to denote field, local, variable, and parameter. In Java, wildcards are supported and widely used but Kotlin doesn’t have any such support.it alternatively uses type projections and declaration-site variance.

Kotlin vs Java: A head-to-head comparison:

Kotlin was built keeping in mind Java’s widespread use. Therefore, it supports Java frameworks and libraries.annotation processing allows for attaching metadata with code. Kotlin supports annotation processors with the kapt compiler plugin. You can also use libraries such as dagger and data binding in your Kotlin project.

Both languages have their own pros and cons. One is the older and has larger community support while the other is growing exponentially in terms of new user and learner base. Organisations have now started to openhandedly accepted Kotlin for the rapid development of Android applications. The best thing about these differences is that you can learn both simultaneously, especially as they are interoperable and benefit from each other.