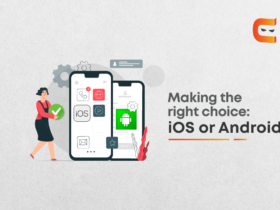 Let’s go through the features under the two sub-categories.

The most common error that developers encountered while coding in the android studio was the “NULL pointer exception”, it has been a pain in the neck for developers for decades as it has led to the crashing of their application. The introduction of Kotlin has eliminated this error by putting NULL ability front and centre. The Kotlin compiler enforces that variables cannot be set as NULL.
On the other hand, if you explicitly declare a variable as nullable, you can hold a NULL value, without the compiler getting alarmed.

We can add our own features to the already existing classes with the help of Kotlin that simplifies development. You don’t need to create an entirely new class for just one extra variable or function, this saves time and you can have classes that are customised according to the developer’s needs. Anko is an example with libraries that make efficient use of extensions and create wrappers around Android APIs, to simplify development.

Anko is a set of helper functions that assist you to develop something with the minimum boilerplate code (code that has to be included in multiple places with little or no alteration). It’s further divided into sections that facilitate you to deal with Layouts, SQLite and Coroutines. This modularisation allows you to include only what you require from the pile.

For example, if we created an array list of integers and declared the variable type to be collection events, then we would receive an unresolved reference error when attempting to invoke the add method. The compiler maps the Java collection to the appropriate Kotlin interface. This gives you a few additional options while creating objects.

For example, if you want to create a list, but you want that list to be read-only, then you would use the list of function to create it, but if you want it to be able to modify your list, then you would use the mutable list of function in the structures similar for other collection types like map and set. There are other methods also that are mutable, but don’t start with the word “mutable”.

For example:
Method “sortedMapOf” enables us to return a mutable map. This allows us to append items to our map, remove items as well as clear all items.

Kotlin provides the user with various data manipulation function that helps them to eliminate boilerplate code and makes programming concise. Suppose we have to design an application that provides a premium feature for the people who are above the age of 18, the naive approach is to copy the list and iterate through the list and eliminate the not required users, but Kotlin provides us with the feature of selecting the required people from a given list and keeps the original list unaltered, this saves a lot of time and helps us to reduce code redundancy also.

This feature is also very helpful when it comes to implementing a search view to sort a recycler view or list view. In fact, we can find the values that are not included by using the negotiated filter, “filterNot”, which lets the user store elements that are not included in this lamda function. We can even specify the number of items that we want to include in our filtered list.

Generally, geofences are created by authorities to keep an eye on individuals like by universities to monitor its students, offices to monitor its employees, but sometimes user themselves create a geofence so that as soon as they reach a particular location specified by its latitude and longitude value they may get a reminder like as soon as you a person comes closer to his laundry shop, he will get a reminder to pick up his stuff. We can have multiple geofences around 100 on a single application.

Some common applications of geofences are:

Change the style of the shape as filled, outlined, or both.
6.drawText() method.
Used to draw text.
7.setColor().
Used to set the text colour.
These methods are generally used when the user is designing a GAME.