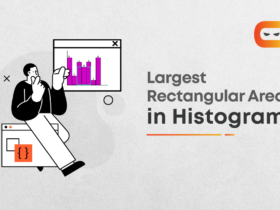 The Largest Rectangular Area in a Histogram

Introduction To Types of Algorithms

Here is a list of the types of Algorithms to begin with:

The simplest possible algorithm that can be devised to solve a problem is called the brute force algorithm. To device an optimal solution first we need to get a solution at least and then try to optimise it. Every problem can be solved by brute force approach although generally not with appreciable space and time complexity.

Later we will see this time complexity to be reduced to O (logn).

In this algorithm, a decision is made that is good at that point without considering the future. This means that some local best is chosen and considers it as the global optimal. There are two properties in this algorithm.

Greedy Algorithm does not always work but when it does, it works like a charm! This algorithm is easy to device and most of the time the simplest one. But making locally best decisions does not always work as it sounds. So, it is replaced by a reliable solution called Dynamic Programming approach.

For better understanding lets go through the most common problem i.e. Job scheduling problem: Let us consider a situation where we are given the starting and end times of various events in an auditorium. Now your job is to maximise the number of events that can be organised in the auditorium where no two events overlap ( starting time or ending time of one event does not fall in between the starting and endpoint of another event).

We consider six such events:

Now a brute force solution would make us think that if we sort the events by their starting times & starting with the first event while excluding all events which overlap the previous will certainly give a solution but it wont maximise the number of events. Let us see, after sorting by starting time –

So, the events that can be organised are – A, F. So, our brute force approach will have multiple such cases and fail if we don’t select the optimal initial event. Now let’s see what our greedy algorithm suggests. According to greedy algorithm we sort the events by their ending times, i.e. we select events which ends first. Our new event table will become:

So, we choose – B, E, C which is certainly a larger number of events than previous. Hence in such cases, the Greedy Algorithm gives the best solution to this type of problem.

This is one of the simplest to devise algorithms as it does not require specifically think about every subproblem. This means we just need to think about the existing cases and the solution of the simplest subproblem, all other complexity will be handled by it automatically. Recursion is a very powerful tool although we should always take care of memory management here as recursion works using recursive stack which is called every time recursion function is invoked. Recursion simply means calling itself to solve its subproblems.

Time Complexity: O(n)
Although always remember to give the base case else the loop will continue to infinity giving memory error. This algorithm is simpler to design and implement.

It is an improvement to the brute force approach. Here we start with one possible option out of many available and try to solve the problem if we are able to solve the problem with the selected move then we will print the solution else we will backtrack and select some other and try to solve it. It is a form of recursion, it’s just that when a given option cannot give a solution, we backtrack to the previous option which can give a solution, and proceed with other options.

Let us see the application of this algorithm in generating all strings with n bits.

This is one of the most used algorithms in programming. This algorithm divides the problems into subproblems and then solve each of them and then combine them to form the solution of the given problems.

Again, it is not possible to solve all problems using it. As the name suggests it has two parts: Divide the problem into subproblems and solve them.

The given problem is divided into two parts of n/a and n/b size and then computed separately and recursively to bring back the result and combine them to form the solution.

The flow of the program moves to the right subarray as five is greater than the current mid (3) and hence doesn’t iterate over half of the elements and hence reduces the time complexity. Although this is not applicable if the array is not sorted as it can be understood it will just neglect one part of the array and the algorithm will fail.

This is the most sought out algorithm as it provides the most efficient way of solving a problem. Its simply means remembering the past and apply it to future corresponding results and hence this algorithm is quite efficient in terms of time complexity.

This algorithm has two version:

Let us take a simple example of such algorithm. Finding the Fibonacci Sequence.

Recursive stack of the function for n = 4

The best example of this is choosing the pivot element in quicksort. This randomness is to reduce time complexity or space complexity although not used regularly. Probability plays the most significant role in this algorithm.