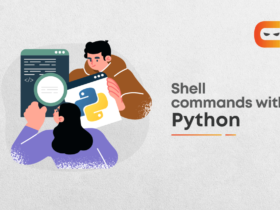 How To Execute Shell Commands With Python?

With so many programming languages available, such as C++, Java, Python, Ruby and CSS, it can be easy to get lost and wonder which language should be added next to your skillset. You can choose a language based on your interest, of course, but it’s often important to look at what’s hot in the market and pursue it.

The digital era is on a constant dynamic change, and so are the expectations of IT companies. As a developer, you need to think, program and execute tasks in a manner that was way different than a decade ago, all the while striving to continue evolving and upgrading skill sets as per the rising demand of hiring organisations.

Of these, Python and Ruby are the new, next-generation, server-side scripting languages that focus on creating applications that are simpler, crispier and high-performance codes. If you’re looking at picking out one of these languages to add your skillset, read on to find out the differences between them and how these differences matter to you.

Ruby is a dynamic, open-source, reflective, object-oriented and general-purpose programming language that can be used to create web applications. Created by Yukihiro “Matz” Matsumoto in 1995, Ruby is made up by blending parts of its creator’s favourite languages, including Perl, Smalltalk, Eiffel, Ada and Lisp, to form a brand new language that balanced functional programming with imperative programming.

Ruby is just like a human body, simple appearance outside, but inside is very complex, just like our human body. In Ruby, everything is treated as an object and every bit of information and code is assigned its own properties and actions. A very flexible language, Ruby allows its users to freely alter its parts. Essential parts of Ruby can be removed or redefined, depending on will. Existing parts can be added upon. Ruby tries to not restrict the coder.

For example, to perform the addition operation, the plus (+) operator is employed. However, if you’d rather use the readable word plus, you could add such a method to Ruby’s built-in numeric class.

Ruby is designed to be infinitely flexible and empowering for programmers. Amazing and elegant web frameworks can be created using small tricks allowed by Ruby on Rails. The number one choice of companies such as Apple and GitHub, Ruby is a popular language when it comes to application development.

Some of the Popular Rudy editors are RubyWin, Ruby Development Environment (RDE) and Vi. These editors make coding in Ruby much easier, more expressive and simple enough for a layman to understand the code and derive its meaning.

A simple Hello World program requires only a single line:

Python is a high-level, interpreted, interactive and object-oriented scripting language. It was created by Guido Van Rossum in 1991.

Python uses English keywords more frequently than punctuation marks and also has fewer syntactical constructions as compared to other languages. Python takes a more direct approach to programming. Its primary goal is to make everything visible to the programmer. It makes understanding and debugging of the code easier. Python is a great language for the beginner-level programmers and it supports a wide range of applications from simple text processing to creating high-end gaming.

Python has a broad standard library which is very portable and comes with cross-platform compatibility. Also, it allows for adding low-level modules to the Python interpreter that can enable programmers to add or customise their tools more efficiently. Data scientists prefer Python over other languages, mainly due to its extensive set of statistical libraries such as NumPy, pandas, matplotlib, TensorFlow, scikit learn and so on.

Most preferred by giants the likes of Google and Instagram, Python is used for developing complex, fast-performing applications.

In Python same simple “Hello World” program looks like this:

Remember that, when you’re programming in Python, pay close attention to the indentation and extra white spaces.

The following table lists the code-level differences between Ruby and Python:

In this table, we attempt a more head-to-head compare and contrast between the two languages:

Which one to learn first?

If you’re a beginner, it might make more sense to pick up Python, because it focuses greatly on understanding the code. It takes a more direct approach to programming and it’s easier because the main aim of Python is to make everything visible to the programmer.

Though Python and Ruby are visually similar, both languages have a different approach to problem-solving. If you have a specific project lined up that requires you to build only web applications, then you could focus on learning Ruby.

Although both, Python and Ruby are efficient and enjoy the loyalty of a large and dedicated community, Python seems the obvious choice in cases where a lot of data computing and processing are involved. Ruby fits in scenarios where rapid prototyping of traffic-heavy applications is required. In Ruby, there’s more than one way to do the same thing whereas in Python, there’s a singular approach but that makes it the most comprehensive, especially if you’re only just beginning.