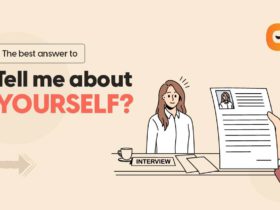 The best answer to “Tell me about yourself?”

Ever since Bjarne Stroustrup introduced the world to C++, coders and programmers have been striving to learn the ins and outs of the language. 1979 seems like a long time ago now, doesn’t it? Regardless, even after 41 years of its introduction, C++ is a language that many consider being evergreen, and with good reason.

It is arguably the perfect language for beginners to learn, it supports object-oriented concepts, and is pretty fast. These are just some of the reasons why programmers love C++. Eager to know more about C++, read on.

C++: A cornerstone for your programming knowledge

Knowledge of C++ will help you build a better understanding because it’s the perfect start for your career in programming. C++ is considered to be the best language for beginners to learn, and in fact, most of the programming libraries are built on it. If you know C++, you can easily learn other languages such as Java and Python, since they are based on similar principles and syntax as C++ (especially Java, being object-oriented).

The influence of C++ on other programming languages is not limited to this. In fact, compilers that compile and run code written in other languages are themselves coded using C++! Examples include C# and Java, where compilers are built using C++. How can one not call the language evergreen!

C++ powers the world more than we give it credit for. In fact, there are so many applications of the language that go under the radar.

Operating system kernels are mostly written in C and C++, examples including Windows, Linux, iOS and Android. Modern browsers like Chrome and Firefox have also been written in C++, as are modern game engines like Unity and Unreal Engine from Epic Games.

Other applications built on the programming language include Adobe’s set of designing and creative software, such as Adobe Illustrator. Games! Who can pass up on videogames! Here’s a nice tidbit- basic videogames are written in C++ itself, helped by the game engines mentioned before. Due to the support of both procedural and object-oriented programming by C++, games can provide extensive performance and control over hardware.

Fast performance, even on this day

C++ is built in such a manner that the support for procedural programming allows for faster performance in applications and games. Even in animation, where efficient processing and real-time reactions are required, C++ remains the top choice for coders, animators and illustrators.

Even if you code in languages other than C++, having sound knowledge of the language can help you increase the performance of your code. This is because knowledge of C++ gives you an idea of how programming processes run at the lowest level. We all know that extracting each drop of performance out of your code entails careful analysis and profiling, and this is exactly what knowledge of C++ helps you achieve. You might even be able to figure out issues that cause performance decreases, such as cache missing or context switching.

With so many benefits and applications, even after 41 years of its an introduction, C++ is by all means what one calls an evergreen language. Fast performance, a great building block for other languages and applications that span a variety of sectors and fields in the real world: C++ is truly one of the pioneers of the programming languages.

Read more about the technical interview questions based on C++.