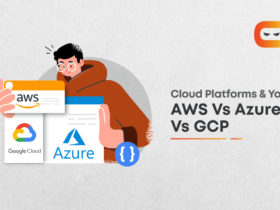 AWS Vs Azure Vs Google Cloud: The Platform of Your Choice?

When you are in college, you need to learn a gazillion of things. Of all the things you can learn while in college, the most important ones are the things that not many are aware of. One such technology, or practice if you would like to put it that way, is DevOps. In this post, we are going to discuss the impact of DevOps and why students must spend some time learning about it:

DevOps is a set of processes carried out by selected tools that aim towards making Development and Operations team a whole. The reason behind the buzz created by DevOps is its ability to carry out projects much faster than primitive software development methods.

The implementation survey of DevOps observed a boom in the year 2016 and it hasn’t stagnated since.

When we have two directions of responses from two teams it is hard to say which direction to follow to have the best customer satisfaction and market exposure and whether or not is the application operational.

Development cycles are often extended due to communication lapses between teams. However, teams can release new versions of their app in shorter chunks of code. Hence minimising the impact of such communication pitfalls.

With joint development and operations efforts, the team is able to innovate and obliterate the errors of previous versions at a faster rate. This is important because it is what sets you apart in business.

Having a huge project divided into numerous short projects and spread among the team can reduce the chances of programming defects considerably. With shorter development cycles, DevOps promotes frequent code versions. This, in turn, makes it easy to detect code defects.

Teams can use their time to reduce the number of implementation failures using agile programming principles that require collaboration and standard programming. Recovery time is an important issue because you should expect some failure. Recovery happens at an explosive rate when both the teams shoot each other’s ideas and then get to fixing the application for the market.

A great example of such tools would be Puppet Enterprise. With Puppet enterprise, teams are able to reduce recovery time significantly and push new technical changes in a seamless manner. Not only this, this tool helps you to be consistent across various development, test, and production environments.

Experimentation is a large part of DevOps and it cannot happen without resonance between both teams. DevOps has improved software development culture. The teams are happier and more efficient. Culture now focuses on performance rather than individual goals.

Development teams understand the world outside their cubicles and operations shares their fixes and problems with development more to the point than before as it no longer involves “passing” the application to the processes and waiting to see what is happening. Processes do not need to wait for a different team to solve a problem. Long-Awaited transparency is achieved due to DevOps as everyone is working towards common goals.

Increased productivity boosts development and also decreases the chances of errors. There are ways to automate DevOps tasks. Continuous integration servers automate the code testing process, reducing the amount of manual work required. This means that software engineers can focus on completing tasks that can not be automated.

Speeding up tools are another chance to increase efficiency. For example:

The team has its hands over hardware resources due to presence of scalable infrastructures such as cloud-based platforms. Accelerated testing and deployment contribute in frequent releases and bug-fixes.

Codes can be compiled at a better speed using tools. One such tool is the Apache Ant. Launched by the Apache Software Foundation, this DevOps tool is used to build automation tools that are used to save time with built-in compiling, assembling, and testing tools.

Having an integrated environment can provide aid in avoiding delays as there’s one less team to wait for and it acts as a continuous delivery chain, much like an assembly line. It also spares us the pain of transferring data between different environments such as development, implementation, testing, etc.

All benefits of DevOps and its tools come hand in hand with reduced costs and requirements of IT staff. DevOps has lead in reducing human involvement by 35 per cent and 30 per cent less costs.

When it comes to quick automation and reducing human involvement, Gradle is one such tool that you can rely on. Development teams can use Gradle to build, automate, and deploy software in a fairly automated manner.

So, these were some of the important things that you must know about DevOps. Have any questions or wish to learn some more about DevOps? Feel free to get in touch with us.

Learn more about the courses at Coding Ninjas and develop your understanding of the trending technologies.