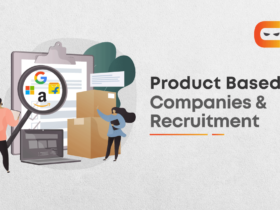 Top 6 Product Based Companies In India & Their Recruitment Process

Let’s face the truth: Coding is difficult. Yes, it can be a very exciting affair at first, but it requires a lot of effort. You are likely to sit in front of the computer screen for hours to code. You have to always keep yourself updated with the new trends in the field of technology and also, enter coding competitions to test yourself. Coding requires you to invest your entire self into it. However, you have always known that the prospects of coding are good. The market will likely have a job opening for you if you do well.

But then again, you might have often thought about the real future in software development in India. While the world of technology is always evolving and changing, are there enough options available in India?

Let’s first decipher the statistics. As of February 2019, the IT industry has contributed about 7.9% of the GDP of the country. It created about 1,05,000 jobs last year. The IT industry has helped to fuel the rise of startups in India with more than 5,200 startups appearing in 2018.

As per the statistics, the IT industry has a compound annual growth rate of 10.71% and is estimated to reach US $350 billion by the year 2025. So, it’s clear that the software industry is and will be booming.  But in what avenues?

Firstly, we have to understand why there has been such massive growth in the software industry in the last decade. It is because of the digitization phase. More and more people were gaining access to the internet. People were slowly realizing the need for computers and hence, computers entered in almost every household. This resulted in a major requirement of employees in the IT sector in the last decade. The digitization phase is almost over now. And so, you can’t expect the same kind of demand for software engineers in this age.

However, smart work and planning can still make you an in-demand software developer.

Remember, qualifications play a major role in this industry. A person with a Master’s degree in Computer Science will get a job sooner and in a much higher position than a person with a Bachelor’s degree. Also, your coding experience and external certificates will matter. If you have taken part in coding competitions and won prizes, that will be relevant too during the interviews.
Build up your credentials and make smart choices for yourself. It will help your journey in the future world of software development in India. To equip yourself with the best-in-class capabilities, you can explore some of the new courses at Coding Ninjas.

Learn more about Coding Ninjas and become the trendsetter with the courses in the domain of programming.

To know more about the latest technology trends, click here.