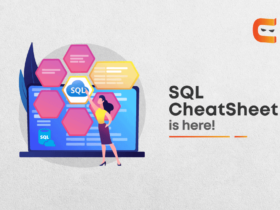 SQL CheatSheet For Developers and Beginners

Maybe from the time of its inception as a calculating machine which could also do a bit more — computers have made conspiracy theorists believe that it can replicate the human brain. With modern advancements, computers are becoming more and more complex almost like the human brain. The Turing Test is something every AI enthusiast tries to tackle — that is — trying to make computers exhibit intelligent traits that make it indistinguishable from human beings. But what’s the main difference between the computer and the brain?

Like the brain nerves, computers also have a lot of transistors (which can seem like artificial neurons) connected to each other which receive and distribute information. Both can store data and reuse them in a certain way. But that’s where the similarities end. Computers are fed the information (meaningless for them) that they require previously and they arrange the information in a way that they were programmed to do.

However, brains acquire information meaningful to them and can arrange them in many unusual, unknown ways, thereby ‘creating’ something. That’s the beauty of the human brain — they go through a slow process of learning how to use the information and develop something new out of it.

However, neural networks are bringing a slight difference in the traditional pre-defined input-output scheme of computers.

Neural networks try to simulate the workings of the brain cells so as to recognise patterns, learn from it and thereafter, develop decisions based on them. Yet it is not as complex as the brain — it is made out of the same algebraic equations and mathematical variables that are put in the computer. The information remains meaningless to the computers, but for the people working on them — it means ‘progress’.

How is the Neural Network Connected?

In a Neural Network, millions of transistors or artificial neurons are arranged in units and they are placed in layers as a series. Each of them is well-connected. Some of them are called input units. These units try to acquire information from outside and then use them to recognise patterns and different information from the outside world. Then, the information is sent to the output units. In between the two, there are hidden units with which the input and output are connected and these are the ‘artificial brain’. Each of the hidden units and each of the output units is fully-connected with each other and these connections are represented by a number called weight. The weight can be positive, exciting another unit, or negative suppressing another unit. This way, it reacts like the synapses of the brain.

One of the main requirements of neural networks is that it has to learn things. It is done through a process called feedforward network. When it is being trained or learning and then, after the training, operating normally, the input units take in the information, which is passed on to the hidden units, which in turn is passed to the output units. Every unit does not fire altogether. Each input is received and then, it is multiplied along with the weight of its connection that it is travelling along and when the sum is more than the threshold amount, it is triggered and sent forward.

The feedback loop is important. Learning in Neural networks is through a process called backpropagation. Here, the output produced is compared with the output it is meant to produce. Using the difference, the weights are modified and the difference is reduced until the actual, as well as the intended output, becomes the same. It is similar to how our brains react to feedback. As a bowler, if we throw a ball which moves slightly to the left of the wicket, in the next ball, we modify the pace in a way that it will swing to the right. Feedback loop and errors are the way in which both humans and computers learn.

However, computers deal with binary numbers and so, they will only have 0s and 1s as answers — that is, Yes and No. So, let’s say the difference between table and chair: if you input 25 different kinds of chairs, then the input has to interpret the item by posing different Yes/No questions to it. Does it have back support? Can some sit on it for a long time? Does it have upholstery? Does it have a top? These questions may even help it understand that a sofa is also a chair — as it belongs to the same category and that it is not a table.

Neural Networks are being used in several places. Firstly, since it’s based on patterns and numbers, it can be used for autopiloting planes and for industrial manufacture where the right amount of formulaic ingredients will produce a product with predefined consistency in terms of colour, shape and weight. For checking the patterns of ‘credit or debit cards’, Neural Networks can be used. But the neural network technology is making its move in many areas.

If reading the above spiked your interest in technologies, coding and such, we recommend you drop us a visit at CodingNinjas, where we’ve got you covered!