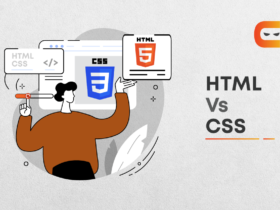 HTML VS CSS: What’s The Difference?

That’s right, today we’re going to enlighten you on Node.js and everything about it.

We’ll get straight to the most basic question — what exactly is this tool that’s rapidly gaining a massive fan following among the developer community?

Not clear still? We thought so! We’re here to break it down for you.

Node.js, most simply, is a framework that allows you to develop server-side applications using JavaScript as the foundation language. It provides an event-driven and non-blocking I/O.

Because it uses a single thread event loop for handling requests, Node.js can support real-time applications even as they scale. The asynchronous event loop that runs continually makes this possible. Unlike PHP, Node.js is not server load intensive. When you use Node.js, you never have to worry about deadlocks in a process since not a single function of Node.js directly performs Input/Output operations. Hence, the processes always run seamlessly! It is this particular feature that makes Node.js the perfect tool for developing scalable systems.

Node.js is the brainchild of Ryan Dahl who designed it in the year 2009. Earlier, Apache HTTP servers could not handle multiple concurrent connections. Also, the process in which the code was being generated would either create multiple execution stacks for simultaneous connections or block the process altogether. Dahl wanted a better way out and thus, he developed Node.js. He first demonstrated his creation at European JS Conference that was held on November 8, 2009.

The initial model supported only Linux and Mac OS X. However, in 2011, Microsoft collaborated with Joyent (sponsor of Node.js) to create a native version of Node.js for Windows. In 2012, Dahl decided to pass on the baton to Isaac Schlueter (the creator of npm) who then passed on the management responsibility to Timothy J. Fontaine in 2014. In December 2014, io.js — a fork of Node.js — was created by Fedor Indutny. An internal conflict regarding Joyent’s governance followed this and io.js was made to be an open governance alternative. However, in 2015, the Node.js Foundation came into being and both the Node.js and io.js communities took the decision to function under the same umbrella — the Node.js Foundation.

One of the many specialities of Node.js is that it can execute a JavaScript code outside of a browser seamlessly! With Node.js, you can use JavaScript for both — writing command line tools and for server-side scripting. So, it runs the scripts server-side to generate a dynamic web page content even before the page is sent to the user’s web browser. In other words, it creates a JavaScript paradigm anywhere, everywhere!

It comes with npm — the largest ecosystem of open-source libraries!

Another awesome feature of Node.js is its Node Package Manager (npm). Essentially, this npm is a storehouse of libraries and other dependencies that have been contributed by the developer community. It is very similar to Ruby Gems. The npm has more than 400k libraries where you can find anything you need to support your Node applications, be it server-side or client-side.

The Node.js framework comprises of smaller modules, with the most prominent ones being Node.JS Core and Node.JS application. You can either use them together or you can use them separately, one without the other — either way, your job will be accomplished fast and without any blocks.

Now that you know the most basic features and perks of Node.js, let’s get to know some of its obvious advantages, shall we?

Now, why don’t you give it a try and experience the wonders of Node.js for yourself?

To read more about Node.js and other web development trends, click here.