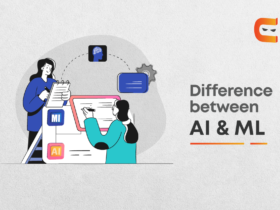 While Data is the new currency of the business and the industrial world, Data Science is the pathway to the next Industrial Revolution. The rising importance of data is creating a demand for skilled professionals who are well-versed in data science technologies such as Machine Learning (ML) and Artificial Intelligence (AI). However, bagging a job in the field isn’t a walk in the park. You need to be prepared to face the challenging interview process during which your mastery over a variety of data skills will be assessed such as your basic knowledge about data science and ML concepts; your ability to analyze and visualize data; your technical and programming skills, and so on.

We know that interviews can be tricky and overwhelming, and hence, we’ve prepared a list of ten most commonly asked machine learning interviews questions.

Predictive models usually have a tradeoff between bias and variance. While bias refers to the error occurring due to erroneous or overly simplistic assumptions in the learning algorithm being used, the variance is the error occurring due to excessively complicated assumptions in the learning algorithm in question. The purpose of the bias-variance is to  minimize the learning error of a specific algorithm by adding the bias and the variance along with some other irreducible errors due that originate from the noise in underlying datasets. For instance, you can reduce the bias by adding more variables to the model to make it complex, but in the process, you’ll add some variance to the model. Thus, to strike a perfect balance in the model, you need to have a tradeoff between bias and variance.

The Box-Cox transformation is a standard power transformation process of transforming datasets to facilitate normal distribution. In other words, it is used to stabilize the variance in datasets. Since most well-known statistical methods sync well with normally distributed data, it is wise to normalize the distribution using this method.

Naive Bayes is considered to be ‘naive’ mainly because it makes such assumptions that are nearly impossible to observe in real-life data. This algorithm assumes that the presence or absence of a particular feature of a class is unrelated to the presence or absence of any other feature of the class variable in question. This entails the “absolute independence of features,” a condition that can never be fulfilled in reality.

Deep learning is a branch of machine learning exclusively concerned with neural networks. It focuses on the ways to leverage certain principles of neuroscience to model large sets of unstructured or semi-structured data with increased accuracy. To be precise, deep learning is much like an unsupervised learning algorithm that aims to ‘learn’ data representations by leveraging neural nets.

Latent Dirichlet Allocation (LDA) is a generative model that represents documents as an amalgamation of topics, each of which has their distinct probability distribution of possible words. In other words, LDA is a technique of classifying topics or documents according to the subject matter.