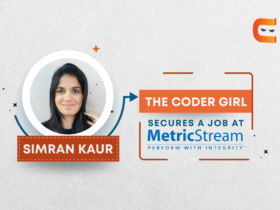 C++ is general-purpose, object-oriented programming (OOP) language that was developed by Bjarne Stroustrup. An extension of the C programming language, C++ combines the features of both low-level and high-level languages and is hence considered to be a hybrid, intermediate level programming language.

Even today, C++ is considered to be a requisite skill for CS students and engineers. It is one of the most challenging programming languages since when writing programs with C++, one has to do extensive thinking. Hence, to crack a C++ interview successfully, you must be well prepared.

To help you crack your next C++ interview, we’ve created a list of some of the most commonly asked questions during interviews.

The essential components of an object-oriented programming language are:

Since C++ is an extension of C, most programs written in C are compatible with C++ too. The primary differences between the two languages are:

Inheritance is the technique of deriving a new class known as ‘derived’ from an old class known as ‘base class.’ With the help of this process, you don’t need to write a code from scratch; you can reuse an existing code by modifying it.

Access specifiers define how functions and variables (members) can be accessed outside of a given class. They can be classified into three types:

A friend class can access both private and protected members of other classes in which it is specified as a friend. For instance, a LinkedList class may be declared as a friend of Node to access the private members of Node.

Static Member is a keyword in C++ that is used to bestow unique characteristics to a specific element. Static members cannot be virtual, and they also do not possess ‘this’ pointer. Static elements are allotted a storage space in the static storage area. While they need to be stored only once in a program lifetime, their life scope equals the program lifetime.

Tokens are the smallest individual units of a program written in C++. They are as follows:

Iterator class allows you to access classes that are inside containers that hold data structures, classes, and abstract data types. Iterators are crucial to understanding the functioning of C++ Standard Template Library (STL) since it offers a way to access data stored in the container classes, for example, maps, list, vector, and so on.

Want to get an in-depth understanding of C++ and its underlying concepts? Join Coding Ninjas today! Our trained and dedicated team of instructors will ensure that by the time you finish the course, you’ve mastered the art of C++.

MySQL Vs MariaDB: What should you choose?